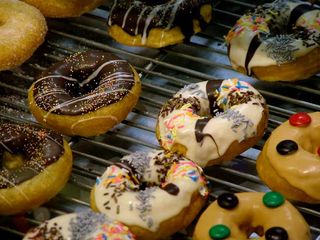 When you eat, not just what you eat, can affect your weight, a new study on mice suggests.

Mice that were fed a high-fat diet during the time they'd normally eat — the regular hours in their daily circadian cycle — gained 20 percent in weight over six weeks. But mice fed the same high-fat diet during hours they should have been sleeping put on 48 percent compared to the weight they started with.

While the results would have to be replicated on humans to see if the effects are the same, researchers suspect they are.

"How or why a person gains weight is very complicated, but it clearly is not just calories in and calories out," said study leader Fred Turek, professor of neurobiology and physiology at Northwestern University. "We think some factors are under circadian control. Better timing of meals, which would require a change in behavior, could be a critical element in slowing the ever-increasing incidence of obesity."

The findings are detailed today in the journal Obesity.

However, more research is needed. A statement from the university claims the study means late-night snacks will cause extra weight gain. But the study results do not support this claim, in part because it was done on mice, not humans, and in part because the mice were not just snacking.

In fact, a study on monkeys in 2006 concluded that late-night snacking did not cause any extra weight gain. In that study, only a portion of the monkeys' food intake — more akin to snacking — was during off hours, whereas in the new study, the entire diet was consumed when the mice should have been sleeping.

But the new study was initiated to look at night shift workers, who would be eating the bulk of their food during hours when humans are meant to sleep. Other studies have found that working the night shift can be hazardous to your health.

"One of our research interests is shift workers, who tend to be overweight," said Deanna M. Arble, a doctoral student in Turek's lab who is lead author on the paper. "Their schedules force them to eat at times that conflict with their natural body rhythms. This was one piece of evidence that got us thinking — eating at the wrong time of day might be contributing to weight gain. So we started our investigation with this experiment."

Our circadian clock governs when we should eat, sleep and be active, in concert with daylight and darkness. It has evolved to be as it is since before we were even human. Other studies have found the body's internal clock also regulates energy use, suggesting the timing of meals can alter the balance between caloric intake and expenditure. And a small study in 2006 found that late-night snacks caused more fragmented sleep.

The researchers next plan to investigate the molecular mechanisms behind their observation to figure out why eating at the wrong time can lead to weight gain.