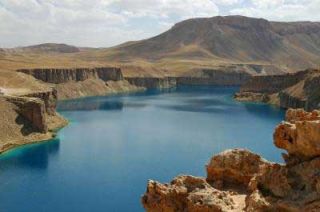 A series of six deep blue lakes separated by natural dams made of the rich red rock travertine have been protected in the first national park established in Afghanistan.

Travertine systems, created by mineral deposits, are found in only a few places throughout the world. The lakes are under growing threat from pollution and other human-caused degradation to the fragile travertine dams, and several animal species have disappeared from the area in recent decades or are at risk.

Band-e-Amir had been a destination for travelers since the 1950s, with a peak visitation in the 1970s. Tourism was almost entirely absent during the war years between 1979-2001. Today, Band-e-Amir is visited every year by thousands of Afghan tourists and religious pilgrims as well as many foreigners currently living and working in-country. The park is near the Bamyan Valley, where the 1,500-year-old giant Buddha statues destroyed by the Taliban once stood.

"At its core, Band-e-Amir is an Afghan initiative supported by the international community. It is a park created for Afghans, by Afghans, for the new Afghanistan," said Dr. Steven E. Sanderson, President and CEO of the Wildlife Conservation Society. "Band-e-Amir will be Afghanistan's first national park and sets the precedent for a future national park system."

Key funding was provided by the United States Agency for International Development (USAID), with additional support from the Wildlife Conservation Society (WCS) to conduct preliminary wildlife surveys, identify and delineate the park's boundaries, and work with local communities and the provincial government. WCS also developed the park's management plan, helped the government hire and train local rangers, and provided assistance to the Afghan Government to design the laws enabling the park to be created.

Though much of the park's wildlife has been lost, recent surveys indicate that it still contains ibex (a species of wild goat) and urial (a type of wild sheep) along with wolves, foxes, smaller mammals and fish, and various bird species including the Afghan snow finch, which is believed to be the only bird found exclusively in Afghanistan.

Snow leopards were once found in the area but vanished due to hunting in the early 1980s.

Creating the national park will provide international recognition essential to helping develop Band-e-Amir as an international tourist destination, and assist it in obtaining World Heritage Status, which would provide additional protection, according to a WCS statement.