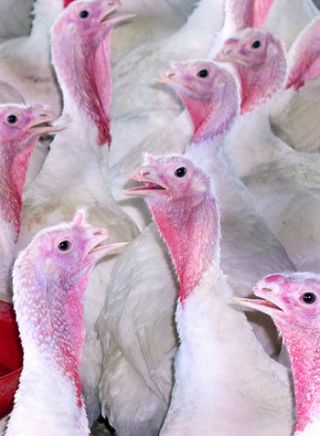 Turkeys will join their feathery cousins, chickens, in having their genome sequenced.

During this Thanksgiving season, hungry diners won't be the only ones turning their attention to the tasty birds. Scientists plan to use the latest technology to sequence the turkey genome.

The domesticated turkey, Meleagris gallopavo, is native to North America. Turkeys have a distinctive wattle that hangs from the underside of their beak and a fleshy piece at the top of their beak called a snood. Their wingspans can reach up to nearly 6 feet (1.8 meters), though they are generally unable to fly.

According to the National Turkey Federation, turkey was the fourth most popular choice of "meat protein" for consumers in the United States in 2007. An estimated 271 million turkeys will be raised in 2008.

The genome sequencing project is being done by the Turkey Genome Sequencing Consortium and will be completed at Virginia Tech's Virginia Bioinformatics Institute.

Once the turkey's genome is sequenced, it will be compared with the already sequenced chicken genome to examine similarities and differences in genome organization.

The genome sequence will help turkey breeders improve commercial breeds of turkey for production traits such as meat yield and quality, health and disease resistance, fertility, and reproduction, the researchers said.

"Having the turkey genome sequence at hand will help uncover disease-resistance and immune-related genes that can then be targeted to improve our understanding of disease development in the context of host-pathogen interactions," said Rami Dalloul, assistant professor of poultry immunology at Virginia Tech.

Other food staples for which the genomes are now known include corn, chicken and rice. Other animals that have been sequenced include dogs, chimpanzees and mice.