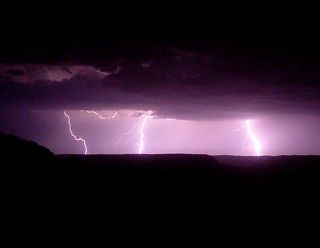 Lightning reaches down from clouds in a step-by-step manner. But scientists don't know exactly how it works.
(Image: © stock.xchng)

More people have died as a result of flooding in the past 30 years than from lightning, tornadoes or hurricanes, according to the National Weather Service. Soon the lightning may actually save lives.

Flash floods occur without warning when a large amount of rain falls within in a very short time period (for example, several inches within a few hours). They typically happen when a slow-moving storm system sits over an area for a long time, or when several systems play follow-the-leader and deluge the same area.

As the rains fall, the ground and streams can't absorb the water fast enough, and it starts to rise, inundating the land, particularly areas near streams and low-lying urban areas (concrete doesn't absorb as much water as soil, so water levels tend to build up faster in cities).

Almost half of all fatalities that result from flash flooding are from people being swept away in their cars on flooded roads. Many people underestimate the power of water — it only takes about 2 feet of water to float a car, according the National Oceanic and Atmospheric Administration.

Colin Price of Tel Aviv University in Israel and an international team of scientists conducted a three-year study of the link between lightning and subsequent flash floods called the "Flash Project."

Price and his colleagues have found that by measuring the radiation emitted by lightning, they can pinpoint the most intense thunderstorms and track the resulting rainfall.

The method can be used to predict both the path of the storm and where heavy rainfall will appear in the next few hours — a technique called "nowcasting." Nowcasting looks at a shorter time scale than forecasting, which looks a few days in advance.

Having real-time information on storms will let researchers warn people in the path of potential flash floods of the impending danger.

The researchers say that the U.S. National Lightning Detection Network could be applied to the results of their research and used to warn flash flood-prone areas of the United States.

Price says real-time flash flood prediction maps should be available on the program's Web site by mid-2009. Eventually, the system may be used to send messages to cell phones, RSS feeds, GPS units and other devices to give people more warning.

"This is a tool for the future," Price said. "And it will be even more exciting in the next decade, when we'll have continuous real-time detection of lightning activity from satellites. That data will be used to predict floods anywhere."