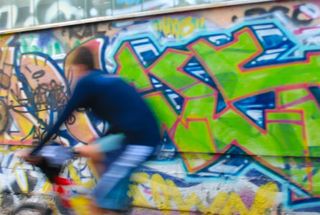 The mere presence of graffiti can cause passersby to break other rules and norms.
(Image: © dreamstime.)

The mere presence of graffiti doubles the number of people littering and stealing in a neighborhood, new research suggests.

The results, which are detailed in the Nov. 21 issue of the journal Science, support and expand on the so-called broken windows theory, which forms the backbone of many crime prevention programs in major cities such as New York.

The theory suggests that signs of disorder, such as broken windows, graffiti and litter, can open the door to individuals breaking other social norms and rules. In New York's "Quality of Life Campaign," adopted in the mid-1990s, city filth, including graffiti, street litter and signs of vandalism, were removed. And petty crime rates did drop.

Even still, solid research backing the theory had been lacking. Studies conducted to date have not proven if the graffiti-type behaviors caused more rule-breaking or whether another variable caused both behaviors, the study researchers say.

With funding from the University of Groningen, Netherlands, the university's Kees Keizer and his colleagues set up six field experiments.

In one, the researchers placed a standard prohibition sign with the text "Graffiti" in the middle of a red circle on an alley wall where people typically parked their bikes. The wall was painted one color.

The researchers also attached fliers with elastic bands to bike handlebars. The flier had to be removed for easy use of handlebars. After the bikes were removed, researchers counted littered fliers as those on the ground or hanging on another bicycle. There were no trashcans around.

In that same setting, on another occasion, the researchers applied graffiti to the alley wall where the anti-graffiti sign was attached. They found that out of the nearly 80 bicyclists monitored, 69 percent littered in the graffiti scenario compared with just 33 percent in the non-graffiti alley.

In another experiment, the researchers showed that bikes illegally locked to a fence caused more people to violate a no-trespassing sign in the area.

In two other experiments, the researchers found that graffiti and litter can lead to stealing. They stuck an envelope that contained cash partway into a mailbox so that passersby could see the envelope and the money within. In one scenario, graffiti covered the mailbox. And 25 percent of passersby stole the envelope from the graffiti-covered mailbox, while just 13 percent stole from the clean mailbox.

When litter was scattered around the clean mailbox, nearly 30 percent of passersby stole the envelope, compared with the 13 percent in the litter-free and graffiti-free scenario.

Laws that prohibit littering or graffiti, say with a fine, won't work by themselves, study team member Keizer said. "You need to make that link between the sanction and the norm," he told LiveScience. "Otherwise people will just get focused on avoiding that sanction."

He added, "And when the police officer isn't around anymore you see the norm-violating behavior become apparent again."

In addition, people need to feel part of a community, he said, so that potential rule-breakers will care about how their crimes affect others in the community.