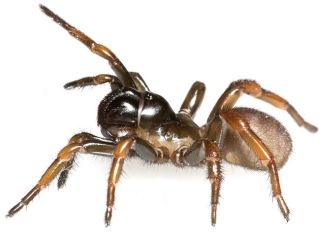 A sneaky spider has been named in honor of rock musician Neil Young.

Jason Bond, a biologist at East Carolina University, named a newly discovered arachnid, Myrmekiaphila neilyoungi. It is also known as a trapdoor spider.

"There are rather strict rules about how you name new species," Bond said. "As long as these rules are followed you can give a new species just about any name you please."

He added, "With regards to Neil Young, I really enjoy his music and have had a great appreciation of him as an activist for peace and justice."

Bond discovered the trapdoor spider last year in Jefferson Co., Ala., and later he and co-author Norman Platnick of the American Museum of Natural History in New York formally described the species in a journal article.

The genus Myrmekiaphila refers to a group of trapdoor spiders. Like some of its relatives, the newly named spider lives in a burrow and crafts a trap door to seal off its living quarters from parasites and predators.

"Just as orb-weaving spiders make webs out of silk, these more primitive spiders also use silk, but not [for webs]," Platnick told LiveScience. "They use it to line burrows, and an extension of the lining is part of the trap door."

The hinged lid also provides a sneaky way of snagging dinner. This sit-and-wait predator hangs out behind its camouflaged trap door, waiting for a passerby. When it senses the vibrations of a nearby insect, the spider pops open the silken flap and drags the prey into its burrow.

To identify the "Neil Young" spider as a new species, the scientists examined both its physical features and genetic material. In general, taxonomists rely on differences in genitalia to distinguish one spider species from another. Apparently, spiders have some of the most elaborate genitalia in the animal kingdom.

"One theory is that there is a great deal of sexual selection as opposed to natural selection in genitalia features," Platnick said, so mate choice is based partly on genital features.

The new trapdoor spider is not the first creature to have risen to rocker status. The whirligig beetle (Orectochilus orbisonorum) was named in honor of the late rock 'n' roll legend Roy Orbison and his widow Barbara.

And asteroids have been graced with names honoring Ringo Starr and the other members of the Fab Four. Other space rocks have been named for celebrities, such as rock musician Frank Zappa, and the classical composers Mozart, Bach, Beethoven and Brahms.