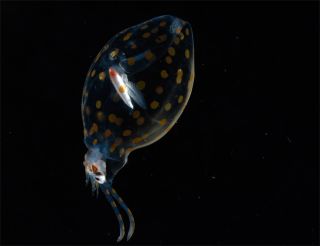 A submerged mountain ridge beneath the North Atlantic Ocean has revealed a new crustacean species and oodles of other life forms, ranging from polka-dotted glass squid resembling beach balls to grim viperfish with teeth like ice-picks.

The finds were made by a team of 31 scientists during a five-week expedition to explore life along the Mid-Atlantic Ridge using remotely operated vehicles equipped with digital cameras and other technologies.

The "underwater eyes" surveyed regions from a half-mile to 2 miles (800 to 3,500 meters) deep and revealed distinct habitats, with colorful carpets of sponges and corals covering the rocky cliffs, and starfish, brittle-stars, sea cucumbers and burrowing worms taking residence in the softer sediments. Above the ridge, fishes, crabs, squid and shrimps foraged for food.

On the western side of the underwater ridge, the scientists, led by Monty Priede of the University of Aberdeen in Scotland, discovered swarms of what could be a new species of Ostracod, or seed shrimp. The shrimp-like animal camouflages itself in the murky waters between depths of 164 and 656 feet (50 and 200 meters) with its see-through body.

As with the seed shrimp, the appearance and lifestyle of all the ridge's wonky creatures are a perfect fit for deep-sea life. The jewel squid, for instance, sports lopsided eyes to keep an eye out for predators (like the viperfish) both above and below.

“It is like surveying a new continent half way between America and Europe," Priede said. "We can recognize the creatures, but familiar ones are absent and unusual ones are common. We are finding species that are rare or unknown elsewhere in the world.”

The scientists still have extensive work to do studying the collected creatures along with physical data from the region.

"The Mid-Atlantic Ridge is still relatively unexplored so this voyage will have played a vital role in expanding our knowledge of the biodiversity of the region," said Steve Wilson, director of science and innovation for the Natural Environment Research Council in Wiltshire, England, which funded the expedition.