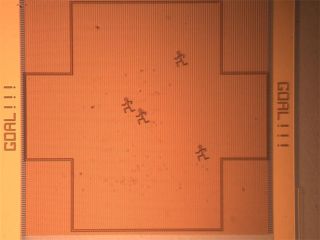 Photograph (microphotograph) of a playing field for the nanogram robots.
(Image: © NIST)

Soccer fans will need a microscope to keep up with this game: Tiny robots will dribble a “soccer ball” no wider than a human hair on a field that can fit on a grain of rice.

This weekend, as part of the 2007 RoboCup in Atlanta, Georgia, a new fleet of bots will debut in the Nanogram Demonstration competition. The nanoscale soccer games are being organized jointly by RoboCup and the U.S. Department of Commerce’s National Institute of Standards and Technology (NIST).

Five teams are entered in the nano-competition: two teams from Carnegie Mellon University in Pittsburgh and one each from the U.S. Naval Academy in Maryland, the Swiss Federal Institute of Technology and Simon Fraser University in Canada.

The nanoscale robots, shown in this video, will play on a silicon microchip “field” that is laced with electrodes from which the bots can draw power and get electronic instructions. Teams monitor their “players” on a screen hooked up to a microscope.

The tiny athletes will compete in three events designed to test their overall agility and ability to manipulate objects, including:

RoboCup is an annual international competition designed to foster innovations in intelligent robotics. NIST hopes the nano-soccer competition will provide scientists with information about the feasibility of tiny computer technologies.