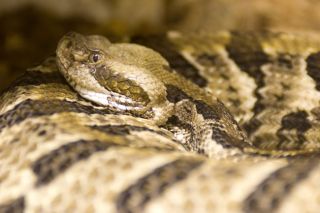 Timber rattlesnakes, like this one, are shy and don't like to give away their presence by rattling.
(Image: © Darrengreen, Dreamstime.com)

Female timber rattlesnakes tend to be stay-at-home moms while the males wander the streets—sometimes even suburban streets, according to new research.

A team of researchers is seeking out these sneaky rattlers, implanting tracking devices inside them and then turning them loose in order to learn more about their behavior.

Wayne Drda, a researcher at the Tyson Research Center at Washington University in St. Louis, and his colleagues recently learned that, contrary to popular belief, timber rattlesnakes are shy and rarely use their rattlers. This is because they are well camouflaged, and rattling gives away their location.

They have also found that females and males behave quite differently. While the females stay with their young for up to 10 days after birth, the males prefer to wander around.

Most snakes, however, do return to the same sites year after year.

Unfortunately for the snakes, their wanderlust—as well as their tendency to pop up in suburban neighborhoods, where families have unknowingly encroached upon their turf—puts them in danger of being killed by fearful residents.

So Drda and his team implant tiny radio transmitters inside the bodies of captured rattlesnakes and copperheads in St. Louis, Missouri to track their movements and habitat use. The transmitters take up about five percent of their body mass and have a foot-long antenna that sits under the skin and last for up to three years.

The team hopes that by studying their behavior, it can help protect the rattlers.

"We don't want to see people become nature vigilantes,” Drda said in a prepared statement. “Our goals are to understand the ways of these species and to educate suburbanites and rural people about them, so that we can keep a proper balance in the face of development.”