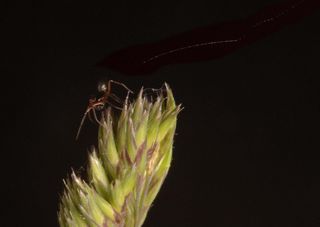 A money spider (Linyphiidae family) stands on a grass-seed head in pre-ballooning posture, ready to take off.
(Image: © Andy Reynolds)

Spiders love to fly. Hundreds can touch down in an acre of land on a day when conditions are right. And before casting out a silk thread and swooping miles through the air, a spider checks the weather just as a human pilot might do during a pre-flight routine, a new study finds.

Called ballooning, a spider's mode of transport involves casting out a "dragline" of silk thread, which gets carried by the wind, along with the attached critter. Since wind is the fuel and sunshine leads to updrafts helpful for take-off, scientists figured sunny, windy days would make for perfect ballooning conditions.

But a team of biologists and mathematicians with Rothamsted Research in England calculated travel distances under a range of conditions for wind and sun levels. A resulting computer model revealed the best flight weather, from an arachnid's point of view, indeed corresponds with real-life peaks in spider ballooning on cloudy fall and spring days.

While hot summer days will spawn more of the updrafts, the associated lack of breeze would mean they couldn't drift anywhere once aloft, the scientists think. At the other extreme, for instance during winter storms, whipping winds that become too strong would interfere with the updrafts to make any flight impossible.

So how does a spider check the weather? Most feel their way with sensory hairs and pit-like sense organs that cover their limbs, or tarsi.

"The literature on spider sensing points to tarsal organs and hairs as having roles in, respectively, the detection of temperature and wind speed," lead author Andy Reynolds told LiveScience.

The research, published online recently by the journal Biology Letters, could have implications for crop management. Spiders prey on agricultural pests, such as mites and aphids, acting as natural alternatives to the chemical pesticides used by farmers.

"Each day of the growing season, around 1,800 spiders land in each hectare (about 2.5 acres) of arable farmland after ballooning," Reynolds said. "If the farmers can predict the influx of spiders, they can reduce the amount of pesticides accordingly."