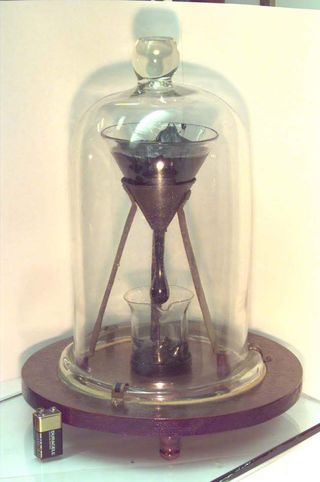 The pitch drop experiment set up in 1927 by physicist Thomas Parnell at the University of Queensland in Australia. Image used with permission from the university

The best science experiments are conducted carefully and often slowly, some taking years of painstaking work to yield results.

Sometimes, they run well after the scientists who began them are long dead.

When he set up the pitch drop experiment at Australia's University of Queensland in 1927, physicist Thomas Parnell had to know he would expire long before his test did. Examining the viscosity of the tar-like substance by the speed at which it flows from a funnel into a jar, the experiment has seen just eight drops fall in the eight decades since it began.

The pitch drop test did win Parnell a posthumous "Ig Nobel" award in 2005, given out for achievements in science that "first make people laugh, and then make them think." Accepting on his behalf was co-winner John Mainstone, a retired UQ physicist and official custodian of the experiment since Parnell's death.

"It is the sort of experiment that does require patience," Mainstone said.

But Parnell's work falls decades short of the duration records set by other experiments.

Deciding on what qualifies as the oldest science experiment is not an exact science, however. Because they vary so much in style and purpose they can't really be compared, experts say.

The pitch drop test is recognized by the "Guinness Book of World Records" as the longest-running laboratory experiment, but there are plenty of other, even lengthier scientific enterprises still on the go around the world:

One of the longest-running experiments in the United States, a set of agricultural test-fields at the University of Illinois at Urbana-Champaign, is currently celebrating its 130th anniversary.

The United States was observing its centennial when the Morrow Plots were established in 1876.

Fewer than 40 million people — not one still alive today — lived in the United States at the time, more than two-thirds of them on farms. Wages for those farmers stood at fifteen cents a month, according to information provided by the university.

Despite being designated a National Historical Landmark in 1968, the corn fields are still in active use. The university takes samples from the site on a regular basis, with the rest of the corn going into storage to be sold at market later.

Like the pitch drop test, the Morrow Plots have also been able to keep with the times, according to the university's online history:  "Little has changed since 1903 and over almost 150 years of use, the plots have provided invaluable data on the effects of crop rotation, natural soil nutrient depletion, and effects of various man-made and natural fertilizers on crop yield."

Waiting for the next drop

No one has ever seen a drop fall in Thomas Parnell's pitch experiment, even though the experiment is displayed prominently in a bell jar in the lobby of the university's physics department.

"It's that continuity that is really quite fascinating," Mainstone told LiveScience. "It used to be this thing that we kept locked in a cupboard, trotting it out only for some student demonstrations. But it really became a kind of industry," over time, he said, noting that students who graduated years ago still bring their families back to the campus to check on the pitch's progress.

The experiment continues to be relevant to modern science, too. Mainstone chats regularly about viscosity with engineers interested in polymers and liquids with properties similar to the pitch.

Being custodian of an experiment like the pitch drop or Morrow Plots is not for the glory-seeking scientist, Mainstone agreed. The next drop of his charge is expected to fall through the funnel by about 2012, he said, and the jar should remain undisturbed long after that. At its current rate, the last of the pitch won't descend for at least another hundred years.

A successor has already been chosen to carry the proverbial pitch drop torch, Mainstone said.

"He'll have to clear his schedule for media requests," he laughed, admitting that otherwise the job doesn't require much work.