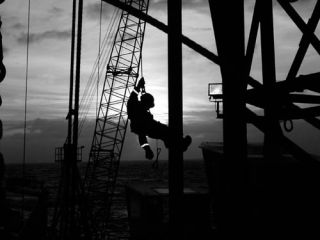 Ocean drillers in their most recent attempt to reach the mantle.
(Image: © IODP; Benoit Ildefonse, University of Montpellier II)

Scientist said this week they had drilled into the lower section of Earth's crust for the first time and were poised to break through to the mantle in coming years.

The Integrated Ocean Drilling Program (IODP) seeks the elusive "Moho," a boundary formally known as the Mohorovicic discontinuity. It marks the division between Earth's brittle outer crust and the hotter, softer mantle.

The depth of the Moho varies. This latest effort, which drilled 4,644 feet (1,416 meters) below the ocean seafloor, appears to have been 1,000 feet off to the side of where it needed to be to pierce the Moho, according to one reading of seismic data used to map the crust's varying thickness.

The new hole, which took nearly eight weeks to drill, is the third deepest ever made into the floor of the sea, according to the National Science Foundation (NSF). The rock collection brought back to the surface is providing new information about the planet's composition.

Already the types of rocks recovered show that conventional interpretation of Earth's evolution are "oversimplifying many of the features of the ocean's crust," said expedition leader Jay Miller of Texas A&M University. "Each time we drill a hole, we learn that Earth's structure is more complex. Our understanding of how the Earth evolved is changing accordingly."

The latest drilling was done at the Atlantis Massif, located at the intersection of the Mid-Atlantic Ridge and the Atlantis fracture zone, two plates of the planet's broken crust. The seafloor is shallower at the center of this region and therefore easier to reach.

It's not clear yet whether drilling should continue at the new hole or if another one should be started in the effort the reach the mantle. Such work isn't likely to begin again in the next year, said Barbara John, a University of Wyoming geologist and one of the co-chief scientists on the expedition.

"We need to evaluate all the data we have from the cruise and re-analyze the seismic data, to determine whether it's better to deepen the current hole or drill elsewhere, or maybe even collect additional seismic data to better constrain where to drill," John told LiveScience. "Our major result is that we've recovered the lower crust for the first time and have confirmed that the Earth's crust at this locality is more complicated than we thought."

John said mantle material will be evident when and if it's brought up because it will have different texture and chemistry and will contain different proportions of minerals compared with rock in the crust.

Drillers use the vessel JOIDES Resolution. The 10-year, $1.5 billion program is funded by the NSF and Japan's Ministry of Education, Culture, Sports, Science, and Technology.

The crust thickness averages about 18 miles (30 kilometers) under the continents, but is only about 3 miles (5 kilometers) under the oceans. It is light and brittle and can break. In fact it's fractured into more than a dozen major plates and several minor ones. It is where most earthquakes originate.

The mantle is more flexible - it flows instead of fractures. It extends down to about 1,800 miles (2,900 kilometers) below the surface.

The core consists of a solid inner core and a fluid outer core. The fluid contains iron, which, as it moves, generates the Earth's magnetic field. The crust and upper mantle form the lithosphere, which is broken up into several plates that float on top of the hot molten mantle below.