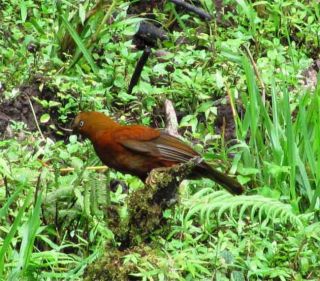 I was on route to my field site in the Northern Peruvian Amazon when I heard the news. The Peruvian government had declared a state of emergency and violent conflict had broken out where I was planning to work.

My project, related to indigenous Aguaruna knowledge of bird ecology, would have to be put on hold. In the meantime, I could only watch from afar and hope my friends and collaborators would be safe.

The problem arose after a governmental decree granting easier access for oil, mining and lumber companies to land adjacent to indigenous communities. Local people feared that easier access would lead to contamination and degradation of their environment. Indigenous political associations organized protests and roadblocks. Sadly, the conflict led to the deaths of over 30 people and many more were injured.

Given the tense situation in the aftermath of the events in June, I decided to temporarily pursue my research in a different site, on the Pintoyacu River, with speakers of the Iquito language.

This language has only 20 or so speakers who all are over 50 years old, so documenting traditional environmental knowledge is quite urgent. I gathered valuable data working with the Iquito on their understanding of local bird and plant species, but I still hoped to be able to return to the Aguaruna villages where I had been working for the last six years.

Eventually, I was able to enter Aguaruna communities to pursue my research sponsored by the National Science Foundation's International Research Fellowship Program. I was not able to enter any new communities because the earlier conflict had left lingering suspicions, but I was still welcomed in places where people already knew me.

My work looked at how the Aguaruna view ecological relationships between birds, plants and other animals. The Aguaruna hunt many bird species and have ample opportunity to observe their behavior.

Many things the Aguaruna say about birds would be familiar to a western ornithologist. The way they name birds, and judge which birds are related have strong parallels with western classification. For example, the Aguaruna recognize the relatedness of such natural groupings as parrots, toucans, tinamous and woodpeckers, based on similarities of appearance and behavior.

However, the Aguaruna tend to interpret complex ecological relationships in terms of their own social and cultural reality. For example, some birds in their area follow swarms of army ants to prey on insects and other small animals flushed out by the advancing column. According to western ornithologists, those birds are simply taking advantage of the situation, but the Aguaruna say they are actually controlling the ants, that the ants are like their dogs.

The way the Aguaruna talk about the competitive mating displays of species like the Andean Cock of the Rock (Rupicola peruvianus) is also deeply influenced by their traditional life. Although ornithologists view these events as a competition between males for female mate selection, people in the communities where I worked said that the birds were once people who enjoyed dancing and celebrating. Once transformed into birds, they continued throwing parties just like they used to.

Overall, the experience of working with the Aguaruna was quite rewarding, despite the challenges. The unexpected circumstances at the beginning of my research confronted me with the tragedy of lost life and eroded trust in a place where I have worked and made close friendships. However, I was also struck by the tenacity of indigenous peoples in resisting powerful outside interests threatening their sovereignty and traditional way of life.