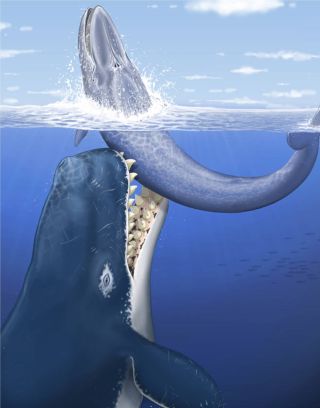 A prehistoric leviathan that represented a more savage Moby Dick once hunted smaller whales around 12 million or 13 million years ago, researchers say.

Fossils of the whale's skull and foot-long teeth found in Peru suggest the monstrous sperm whales ranged in size from almost 43 feet (13 meters) to 59 feet (18 meters), or longer than a school bus. Just the skull alone reaches a length of almost 10 feet (3 meters).

The ancient sperm whale's killer arsenal included 14-inch- (36-cm)- long teeth resembling elephant tusks that allowed it to rip and tear its prey, unlike modern sperm whales that lack functional teeth in their upper jaws and rely upon suction to grab giant squid.

"Based on the size of teeth, robustness of jaws and size of temporal fossa (area of origin of jaw muscles) the bite of Leviathan must have been powerful, and he was likely able to tear pieces of meat from its prey like the modern killer whale," said Olivier Lambert, a paleontologist at the National Museum of Natural History in Paris, France.

In fact, the specimen, named Leviathan melvillei, had the largest known bite of any vertebrate creature with four limbs.

The whale specimen's name has origins in the Hebrew name for a mythical sea monster, and also gives a nod to Herman Melville, author of the novel "Moby-Dick." The new study about its discovery is detailed in the July 2 issue of the journal Nature.

Researchers had previously only found teeth and bone fragments of such killer sperm whales. But the discovery of the new specimen allows them to piece together a story of what the Leviathan might have eaten.

The ancient sperm whale could have feasted upon baleen whales that represented the smaller ancestors of today's humpback or blue whales, according to the researchers.

Like modern baleen whales, the ancient varieties used comb-like plates in their mouths to filter seafood from water, and ranged in size from 23 to 33 feet (7 to 10 meters). Leviathan might have fed upon the high-caloric fatty blubber of such baleen whales to satisfy its nutritional needs as a top predator of the prehistoric seas.

"It was larger than other marine mammals existing at that time, even baleen whales that were smaller than most of the living baleen whales," Lambert told LiveScience.

The constant threat of Leviathan may have even pressured the baleen whales to begin evolving into the giants they resemble today as a means of protection, researchers said. But they added that the current fossil record remains too fragmented to support that view.

Only the giant shark known as megalodon could have matched the Leviathan for size when alive. Whether the two behemoths ever competed for food or fought on occasion remains unknown, Lambert said.

Having the view from the top of the food chain doesn't always look good. Top predators have unstable positions, because they rely upon a limited range of prey sizes to sustain themselves, Lambert pointed out.

A cooling climate during the Late Miocene around 10 million or 11 million years ago resulted in the disappearance of giant, active predators such as Leviathan. That perhaps paved the way for the rise of smaller, active marine predators, such as the modern killer whale.

Sperm whales that had specialized in deep-ocean feeding may have fared better than Leviathan, because the deep-ocean environment with no light and stable temperatures is less affected by climate change.

"Sperm whales that feed on deep-living squid are much less vulnerable to climatic deterioration than surface-bound [active predators]," said Jelle Reumer, a palaeontologist at the Natural History Museum of Rotterdam, Netherlands and coauthor on the study. "This could be one of the reasons that the squid-suckers still survive."

The Leviathan now resides in the Natural History Museum of Lima, Peru, and may remain unique for a long time to come. The relatively small numbers of such top predators challenge paleontologists to find more examples.

"While literally hundreds of baleen whale carcasses were found in the Peruvian desert, we up till now have only one Leviathan," Reumer said.