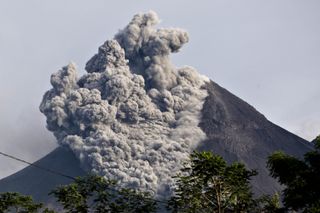 An image from October 2010 shows a blast from another volcano in Indonesia.
(Image: © Ulet Ifansasti/Getty Images)

Tangkuban Perahu, a volcano on the island of Java in Indonesia, blasted a huge cloud of ash into the air today (July 26), causing panic and spurring an evacuation of the vicinity, according to the Associated Press (AP).

There are no reports of injuries, according to the AP, but the local government in the city of Bandung has closed the mountain to visitors and ordered airplanes to avoid the area. Local officials are reviewing whether the ash column indicates that the volcano poses an increased risk of eruption. Bandung is one of the biggest cities in Indonesia, with a 2010 population of nearly 2.4 million, according to the Indonesian census.

The ash from the blast fell over a region of 0.6 to 1.2 miles (1 to 2 kilometers), according to the AP. Disaster officials in the region said there's some risk that a powerful blast of steam and ash could follow, the AP said. [The 11 Biggest Volcanic Eruptions in History]

Volcanic ash isn't the same thing as the soft grey stuff that's left behind after you have a campfire, according to the U. S. Geological Survey. Volcanoes are hot, but their heat comes from magma, not fire. The ash that comes out of volcanoes is actually crumbled rocks, minerals and volcanic glass — all turned into a fine powder during explosions inside the volcano. The resulting ash is abrasive and doesn't dissolve in water.