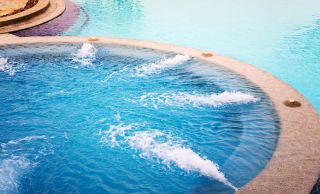 An Indiana woman's vacation took a grim turn when she developed a serious leg infection after spending time in the hotel's hot tub, according to news reports.

The woman, 26-year-old Taylor Bryant, went on vacation with her family to Tennessee over spring break, according to local news outlet RTV6. After a few days, she noticed a rash on her leg and went to a local doctor. Bryant told the doctor she'd spent the past three evenings in the hotel's hot tub. She didn't seem to have any other risk factors for developing the rash.

"Every night, Sunday, Monday, and Tuesday, we were in the hot tub and pool, and [the doctor] said that's the only way that she could have thought that I would have got this infection, is from a hot tub," Bryant told RTV6. [5 Weird Ways Hot Tubs Can Make You Sick]

Doctors said Bryant may have Pseudomonas folliculitis, also known as "hot tub rash." The infection is caused by the bacterium Pseudomonas aeruginosa, and is one of the more common illnesses linked to hot tubs.

The risk of catching this type of infection in a hot tub is increased because the high water temperatures can cause disinfectants, such as chlorine, to break down faster, according to the Centers for Disease Control and Prevention (CDC).

Bryant was given an oral antibiotic, but her infection continued to get worse, to the point where she was unable to walk, RTV6 reported.

"My husband even asked, 'Are we gonna be able to fight this off? Are we talking about amputation?" Bryant said. "[The doctors] were like, 'There's nothing that we can promise right now.'"

That's when doctors treated her with IV antibiotics, and her infection finally started to get better.

Most cases of hot tub rash are not severe, and clear up on their own without treatment, according to the CDC. But in some cases, people can develop complications. Hot tub rash is a type of folliculitis, a skin condition in which hair follicles become inflamed, typically as the result of a bacterial or fungal infection, according to the Mayo Clinic. If the infection progresses to a deeper part of the follicle, it can lead to abscesses, permanent skin damage — including scarring or dark spots — or a recurrent or spreading infection.

Bryant can now walk again, and says she doesn't plan on going in a hot tub ever again.

To prevent hot tub rash, the CDC recommends showering with soap and cleaning your swimsuit after getting out of the water. People can ask the hot tub operator if the disinfectant and pH levels are checked at least twice a day.