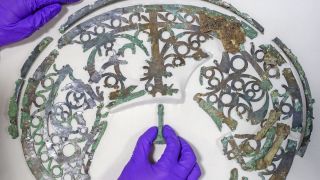 Part of a headdress from a helmet that belonged to an Iron Age warrior, who likely fought against the Romans in about 50 B.C.
(Image: © Steve Parsons/PA Wire/Zuma)

An Iron Age warrior who likely fought Julius Caesar's legionnaires has been unearthed in the United Kingdom, according to news sources.

The grave of the Gallic warrior was filled with wondrous riches, including a bent sword and a metal helmet with a headdress, archaeologists at Fishbourne Roman Palace, a museum in Chichester, West Sussex, England, told reporters on July 22, according to The Telegraph.

Decorated with Celtic designs, the helmet is "absolutely unique," Melanie Giles, a senior lecturer in archaeology at The University of Manchester, said, according to The Telegraph. This ornate headgear would have exaggerated the warrior's height and would have made him look "absolutely fabulous," she said. [In Photos: Boneyard of Iron Age Warriors]

Archaeologists found the grave in 2008 during a routine excavation prior to the construction of a housing development in West Sussex. However, it took researchers several years to properly study the man's skeleton and grave goods.

The scientists' analysis showed that this warrior was probably Gallic, meaning he hailed from what is now modern France. He likely came to Britain to fight (or perhaps flee) Caesar's forces sweeping continental Europe in about 50 B.C., they said.

"It really is absolutely a unique find in the British Isles and in the wider continent," Giles said. "We don't have another burial that combines this quality of weaponry and Celtic art with a date that puts it around the time of Caesar's attempted conquest of Britain."

Though this warrior's name is lost to history, he was either Gallic or "someone from eastern England who may have gone and fought with the Gauls," she said. This alliance "was a problem for Caesar, " who was fighting the Gauls at the time.

If the warrior was a Gaul, then why was he in Britain? It's possible that he came to the region after fleeing Roman conflicts in continental Europe, perhaps to share his knowledge about which strategies and tactics worked best against the Roman Empire, Giles said.

The warrior might have even been a military leader for King Commius, who initially ruled in Gaul but fled to Britain after battling Caesar, said James Kenny, an archaeologist with the Chichester District Council.

"Due to the richness of the finds within the grave, we believe that the mystery warrior held one of the most prestigious roles in the country," Kenny said, according to The Portsmouth News.

He added that the warrior's bronze headdress would have "shone like gold" and was probably decorated with horse-hair plumes.

Archaeologists are calling this discovery "the most elaborately equipped warrior grave ever found in England." The warrior's grave goods are slated to go on display at Chichester's Novium Museum in January 2020.