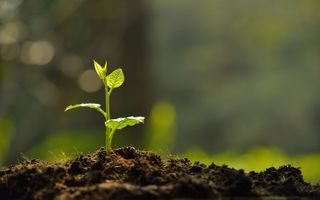 Though this young seedling is bathed in light, it feels no joy or comfort in response to the sun's warmth.
(Image: © Shutterstock)

A tree falls in the woods; but whether or not anyone hears it, the tree has no regrets. Nor does it experience fear, anger, relief or sadness as it topples to the ground. Trees — and all plants, for that matter — feel nothing at all, because consciousness, emotions and cognition are hallmarks of animals alone, scientists recently reported in an opinion article.

The idea that plants have some degree of consciousness first took root in the early 2000s; the term "plant neurobiology" was coined around the notion that some aspects of plant behavior could be compared to intelligence in animals. Though plants lack brains, the firing of electrical signals in their stems and leaves nonetheless triggered responses that hinted at consciousness, researchers previously reported.

But such an idea is bunk, according to the authors of the new article. Plant biology is complex and fascinating, but it differs so greatly from that of animals that so-called evidence of plants' intelligence is intriguing but inconclusive, the scientists wrote. [The 5 Smartest Non-Primates on the Planet]

In animals, neurobiology refers to the biological mechanisms through which a nervous system regulates behavior, according to Harvard University's Mind Brain Behavior Interfaculty Initiative. Over millions of years, brains in diverse animal species have evolved to produce behaviors that experts identify as intelligent: Among them are reasoning and problem-solving, tool use and self-recognition.

Beginning in 2006, some scientists have argued that plants possess neuron-like cells that interact with hormones and neurotransmitters, forming "a plant nervous system, analogous to that in animals," said lead study author Lincoln Taiz, a professor emeritus of molecular, cell and developmental biology at the University of California Santa Cruz.

"They even claimed that plants have 'brain-like command centers' at their root tips," Taiz told Live Science in an email.

This perspective makes sense if you simplify the workings of a complex brain, reducing it to an array of electrical pulses; cells in plants also communicate through electrical signals, according to the article. However, the signaling in a plant is only superficially similar to the billions of synapses firing in a complex animal brain, which is more than "a mass of cells that communicate by electricity," Taiz said.

"For consciousness to evolve, a brain with a threshold level of complexity and capacity is required," he added.

Other researchers who recently investigated the neuroscience of consciousness — awareness of one's world and a sense of self — found that in animals, only vertebrates, arthropods and cephalopods had brains complex enough to enable them to be conscious.

And what's so great about consciousness, anyway? Plants can't run away from danger, so investing energy in a body system that recognizes a threat and can feel pain would be a very poor evolutionary strategy, according to the article.

"Being conscious may seem like harmless fun for plants being cared for in a garden, but imagine, for example, the plight of trees during a forest fire. I would not wish to inflict on trees the consciousness and pain of being burned alive," Taiz said in the email.

"Being unconscious is in all likelihood an advantage to plants and contributes to their evolutionary fitness," he added.

The findings were published online July 3 in the journal Trends in Plant Science.