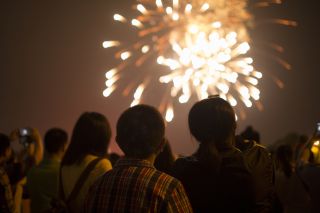 One thousand years before the first Fourth of July, the first fireworks exploded. It didn't rain twinkling stars or light up the night sky — but to the complete surprise and misfortune of one Chinese chemist, it did go "bang."

This "bang" was the product of an ancient quest for immortality, according to Gunpowder, Explosives and the State: A History (Routledge, 2016) . In early-ninth-century China, alchemy was all the rage. The goal of alchemy was to produce a substance that would prolong life, or even cheat death. Alchemy never did uncover a death-defying concoction. But it did produce an explosion that would change the way we celebrate holidays worldwide.[The Weirdest Fireworks Injuries Ever]

An explosion requires just three components. First, there must be a fuel — a chemical consisting of long, chain like molecules with very strong bonds. Then, there must be a chemical called an oxidizer. The oxidizer breaks those bonds, releasing tremendous energy in the process. Finally, you need heat to get the explosive reaction going.

In hopes of producing a new life-prolonging powder, the unsuspecting creator of fireworks mixed charcoal — the perfect fuel — with potassium nitrate, a common food preservative at the time and a strong oxidizer. The addition of sulfur would have lowered the ignition temperature of charcoal. With a little heat to prod the reaction forward, the powder exploded. As one Chinese text dating from the mid-ninth century remarked: "Smoke and flames result, so that [the scientists'] hands and faces have been burnt, and even the whole house where they were working burned down."

Stuffed in bamboo, or in a paper tube, the new concoction exploded in religious ceremonies and at the commencement of the new year, Smithsonian Magazine reported.The loud noise it made when tossed into a fire was thought to scare off evil spirits. (Awe-inspiring pyrotechnic displays wouldn't come until much later — these early fireworks were all about the bang.)

But the chemistry experiment didn't just produce the earliest fireworks. The concoction, later called gunpowder, was also used in warfare. By the 13th century, gunpowder was used to propel rockets painted like dragons toward invading Mongols, and it was in that same century that Marco Polo brought the stuff back to Europe, ThoughtCo. reported.

Today, the fireworks that light up the sky on the Fourth of July are much the same as their early counterparts. Sure, with modern, colorful chemicals at our disposal, pyrotechnicians can put on dazzling displays unheard of in ninth-century China. But for the bang and the explosion, we can thank the quest for immortality.