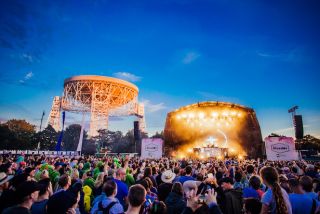 Enjoy the music under the the magnificent sight of the famous Lovell Telescope.
(Image: © BlueDot Festival/Zeitgeist)

Do you love music? Do you love science? Would you like to go to a festival where both are rolled up into a weekend of family fun? Well look no further, as we're giving away four tickets (two adults plus two teens (11 to 15 years old) for a weekend of camping and festival-going at BlueDot festival, located at Jodrell Bank Observatory, Cheshire, United Kingdom.

Kicking off on Thursday, July 18, this event will last through Sunday (July 21) and will be jam-packed with science, art and music in the most creative and immersive fashion. Not only will there be talks from the brightest scientists from around the globe, but there will be a selection of world-famous art on display.

The main stage will sit in the foreground of the observatory's Lovell Telescope, which has been at the forefront of scientific discovery for over half a century. Thursday will begin the long weekend of musical acts, including an opening convert from The Hallé. The kick-off will see music acts such as Hot Chip, Jon Hopkins, Kate Tempest and Ibibio Sound Machine, among many more. Saturday will welcome Kraftwerk 3-D, Jarvis Cocker, 808 State, Sons of Kemet and more. Finally, Sunday will finish with multiple award-winning New Order, John Grant, Gruff Rhys, Anna Calvi, Gogo Penguin and others.

But it's not just the music that people travel from around the world to see, and this includes the brilliant scientists and engineers providing brilliantly informative talks about the latest in STEM subjects. Such names include Britain's first astronaut Helen Sherman, famous science historian James Burke, French-Irish science and history presenter Liz Bonnin and other exciting names in the world of science, including Jim Al-Khalili, Dallas Campbell and the director of Jodrell Bank, Tim O'Brien.

In between the music and the science, there are opportunities to visit some exciting stalls with a variety of interesting cuisines; there are comedy shows, stargazing, microbrewery, mixology, family events, a deep-space disco and so much more.

To be in for the chance of winning tickets to an unforgettable weekend of science and music, all you need to do is enter here before the July 10.