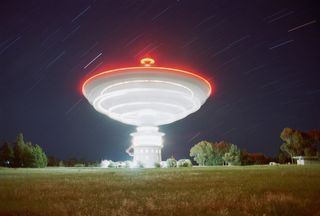 While the truth might be out there, technological aliens don't seem to be — at least not yet. New results from the most comprehensive Search for Extraterrestrial Intelligence (SETI) program ever undertaken — which surveyed 1,327 nearby stars for signals from intelligent beings — have turned up empty.

"There's certainly nothing out there glaringly obvious," Danny Price, an astrophysicist at the University of California, Berkeley, and lead author of a paper about the results, which were published in The Astrophysical Journal, told Live Science. "There's no amazingly advanced civilizations trying to contact us with incredibly powerful transmitters."

While the team didn't find anything this time around, Price said that there could be many explanations for the lack of alien signals. Perhaps the search was conducted at the wrong frequencies, or those signals were hidden by radio interference from Earth. Any such undertaking is limited by the methods and discoveries that humans happen to have made in the course of our own history. [9 Strange, Scientific Excuses for Why Humans Haven't Found Aliens Yet]

"In a lot of ways, SETI is a bit of a mirror back on ourselves and our own technology and our understanding of physics," Price said.

The search was conducted as part of the Breakthrough Listen initiative, a 10-year, $100-million endeavor funded by Israeli-Russian billionaire Yuri Milner that aims to scan the skies for technosignatures: transmissions or other evidence created by technological creatures on other worlds. The initiative, which kicked off in 2015, relies on two of the world's most powerful telescopes — the 328-foot-diameter (100 meters) Robert C. Byrd Green Bank Telescope in West Virginia, and the 210-foot-diameter (64 m) Parkes Telescope in New South Wales, Australia — to try to eavesdrop on alien communications.

In their latest data release, researchers analyzed 1 petabyte (or 1 million gigabytes) of data in both radio and optical wavelengths, looking at more than a thousand stars within 160 light-years of Earth. Several thousand interesting signals appeared during the search, though all turned out to originate from mundane sources, like human-made satellites.

The entire gargantuan information catalog will be publicly available on Breakthrough's Open Data Archive, making it the largest publication of SETI data in the history of the field.

Jason Wright, an astrophysicist at Pennsylvania State University who was not involved in the work, told Live Science he was impressed with the researchers' commitment to public release of their data. "Anyone who thinks the team might have missed something can go over their results and see for themselves," he said.

Wright has previously calculated that all SETI searches conducted to date amount to combing through the equivalent of a little more than a hot tub's worth of water in all of our planet's oceans. The latest addition increases that by 50% in radio wavelengths, he said, or roughly another bathtub's worth.

Price was optimistic that in the future his team will be able to put more stringent limits on the prevalence of life in the universe. The researchers intend to use the upcoming MeerKAT telescope in South Africa, an observatory that will consist of 64 separate 44-foot-diameter (13.5 m) arrays, to search more than a million stars in our galactic neighborhood for extraterrestrial transmissions.

While any signal that appeared would have to be carefully scrutinized to ensure it was genuine, Price said such a finding would be truly revolutionary. "I think it would be one of the most important discoveries humankind would ever make," he said.

Editor's Note: This story was updated to note that Milner is Israeli-Russian, not Russian.