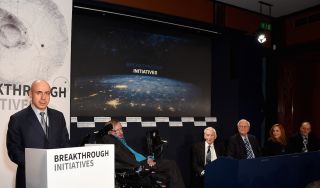 The most far-reaching search for extraterrestrial intelligence (SETI) is now underway: A new $100 million initiative invites the world's top minds to scour the universe for signals from distant planets, scientists announced today (July 20).

Yuri Milner, a billionaire particle physicist and investor, announced the 10-year "Breakthrough" initiatives at the Royal Society in London with other top scientists, including physicist Stephen Hawking and SETI pioneer Frank Drake.

"Somewhere in the cosmos, perhaps, intelligent life may be watching these lights of ours, aware of what they mean," said Hawking, according to Space.com, a sister site to Live Science. "Or do our lights wander a lifeless cosmos — unseen beacons, announcing that here, on one rock, the universe discovered its existence?" [7 Huge Misconceptions About Aliens]

"Either way, there is no bigger question," Hawking said. "It's time to commit to finding the answer — to search for life beyond Earth."

The SETI Institute and previous SETI projects have spent the past few decades scanning the cosmos with radio dishes, looking for non-random signals that could be created by intelligent civilizations beyond Earth. The SETI Institute will be involved in the new initiative, and talks are ongoing about how the Institute's Allen Telescope Array, located in northern California, may be a part of the project, said Pete Worden, former director of NASA's Ames Research Center in Moffett Field, California.

The first of the new initiatives, dubbed Breakthrough Listen, will be the most comprehensive SETI search to date, using two of the world's most powerful telescopes: the 328-foot-diameter (100 meters) Robert C. Byrd Green Bank Telescope in West Virginia, and the 210-foot-diameter (64 m) Parkes Telescope in New South Wales, Australia.

The new search will be 50 times more sensitive and will search an area 10 times larger than earlier SETI programs, the researchers said. It will also scan at least five times more of the radio spectrum, and 100 times faster, project officials said in a statement.

"This new SETI program will be deeper, more sensitive and superior to past programs," veteran planet hunter Geoff Marcy, a professor of astronomy at the University of California, Berkeley, said at a news conference today.

The researchers will have access to each of the two telescopes for between one and two months every year, Marcy said.

"With all of the telescope time that we are going to acquire, we can achieve longer dwell times on the targets, so we can sense weaker, fainter radio signals," Marcy added. The increased telescope time will also help researchers survey about 1 million stars at about 100 galaxies in addition to the Milky Way galaxy, the researchers said. [13 Ways to Hunt Intelligent Aliens]

Breakthrough Listen will also use the Automated Planet Finder Telescope at the Lick Observatory, located on the summit of Mount Hamilton in California, to commence the deepest and broadest search for optical laser transmissions, the researchers said.

Advanced alien civilizations may realize that lasers are a good communication means, as humanity has, Marcy said. "There could therefore be a sort of galactic Internet not born of copper wire, not born of fiber optics, but carried by laser beams crisscrossing the galaxy," Marcy said. "And we, here on the Earth, may serendipitously just happen to fall on those laser beams."

The Lick Telescope will measure the spectra of stars and galaxies, "looking for specific, single wavelengths of which there's a lot of light, which would be best interpreted as lasers from some other civilization," Marcy said.

The search will be so powerful that Breakthrough Listen's optical search will be able to detect a 100-watt laser — the energy equivalent of a typical light bulb — from a "nearby" star 25 trillion miles (40 trillion kilometers) away, the researchers said.

If an intriguing signal is found, the researchers said, they will spend several months verifying it within the scientific community before publishing the detailed results in a scientific journal.

"It must be reproducible," Marcy said. "We must be able to point other radio telescopes at the same coordinates, verify that the radio waves really are coming at the radio [or laser] frequencies that we thought."

The public will have access to the enormous data trove collected by Breakthrough Listen, the researchers said. In fact, experts invite the public to join them as they use open-source software to sift through the vast amounts of data.

Furthermore, Breakthrough Listen's software and hardware will be compatible with other telescopes, so people around the world can join the quest to find intelligent alien life, possibly developing their own methods to analyze the data, the researchers said.

At the University of California, Berkeley, 9 million volunteers from around the world will be able to use a supercomputer platform to search the data for possible extraterrestrial life, they added.

Enthusiasts can also contribute in other ways. A second initiative, Breakthrough Message, asks people around the world to create digital messages that represent humanity and Earth that could one day be sent to advanced alien civilizations.

"The Breakthrough Message competition is designed to spark the imaginations of millions, and to generate conversation about who we really are in the universe, and what it is that we wish to share about the nature of being alive on Earth," Ann Druyan, co-founder and CEO of Cosmos Studios and widow of late astronomer Carl Sagan, said in a statement. "Even if we don't send a single message, the act of conceptualizing one can be transformative."

Other science luminaries involved in the Breakthrough initiatives include astrophysicist Martin Rees.