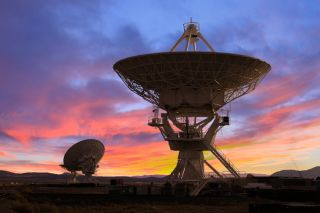 The Very Large Array in New Mexico is searching for out-of-this-world signals from extraterrestrial intelligence. But it still only covers a vanishingly tiny slice of the search space where alien signals could hide.
(Image: © Shutterstock)

Where are all the aliens? For decades, humans have searched for artificial signals, yet the skies above remain silent. But new research suggests that researchers' investigations have so far not been particularly exhaustive; if the total possible search space were equivalent to the all the water in Earth's oceans, we have examined only a hot tub's worth of volume.

In many movies, the galaxy teems with intelligent life-forms who zip around on spaceships and produce other obvious signs of their existence. In reality, programs like the Search for Extraterrestrial Intelligence (SETI) have encountered no noticeable transmissions from another species. That lack of contact was first dubbed "the Great Silence" by sci-fi author and physicist David Brin in a classic 1983 paper in the Quarterly Journal of the Royal Astronomical Society. [9 Strange, Scientific Excuses for Why We Haven't Found Aliens Yet]

"It is often said that we have been looking for 40 years or so, but we still haven't found any signs of extraterrestrial civilization," said Shubham Kanodia, an astronomy graduate student at Penn State University and co-author of the new paper in the preprint journal arXiv, which has been submitted to The Astronomical Journal. "We wanted to see how much have we looked and how much more do we need to look."

Researchers see radio telescopes as an obvious instrument to use for such investigations, because radio waves travel easily through interstellar dust and, in certain parts of the radio spectrum, background interference is minimized. "It is the 'cosmic quiet zone' where we can best listen for a faint whisper across the interstellar expanse," as an article on the SETI Institute's website puts it.

But how much of the skies have researchers scoured for such radio signals? Along with his colleagues, Kanodia created a rigorous mathematical framework to analyze past SETI searches. The researchers looked at eight separate parameters, including the amount of sky a telescope searched, the sensitivity of the searching observatory and the power of a potential signal. They concluded that, of the total possible search space in which a signal could have hid, previous SETI searches have examined roughly 5.8 times 10 raised to the minus 18, or about a quintillionth, of the available space, which is itself merely a miniscule part of the huge range of potential bandwidths that scientists could search through.

The findings support those who argue that "the Great Silence" is merely an artifact of our limited investigations. "Bright and obvious radio beacons might be quite common in the sky, but we would not know it yet, because our search completeness to date is so low," the authors wrote in the paper.

There is much more room to expand these examinations, said Kanodia, as SETI searches now go beyond radio wavelengths. Newer studies target signals in the optical bands as well, because intelligent aliens might flash powerful optical laser pulses into the universe, either as signals or as a method to drive interstellar spaceships powered by solar sails, Kanodia said. He and his colleagues hope to also eventually quantify the amount of optical SETI that has been done to date, he said.

However, even if we searched both optical and radio wavelengths thoroughly, that would likely represent only a small sliver of the potential search space. In the course of their history, extraterrestrials might have come across many phenomena that humans have not, some of which might be useful for generating signals, Kanodia said. "In all probability, there is still a lot of physics that we have not yet deciphered or understood," he said. "If you were trying to communicate with a caveman with a walkie-talkie, you would not receive any reply."

The results are heartening, said Jill Tarter, an astronomer and former director of the Center for SETI Research, who has done similar calculations in the past. Her results suggested that total SETI searches were akin to looking at a drinking glass's worth of seawater and concluding that there were no fish in the ocean. "I was glad to see that I was in the right ballpark," she said. "It's a very big ocean, and so far, we haven't been able to investigate very much of it."

Editor's Note: This story was updated to note that the study looked at eight parameters, including how much of the sky a telescope searched, not the number of star systems searched.