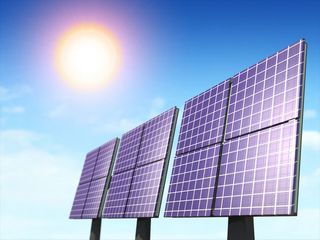 As the catastrophic oil spill in the Gulf of Mexico continues to wreak havoc, renewable energy may never have looked better.

A new poll out of Stanford University, surveying 1,000 Americans between June 1 and June 7, found that while about three-fourths oppose new taxes on gas or electricity to force conservation, 84 percent favor the federal government offering tax breaks to encourage more wind, solar and water power.

Alternative energy proponents say the time is right for help from Washington.

"Our thoughts are with the people living and working in the Gulf as they and other organizations deal with the oil spill," said Denise Bode, CEO of the American Wind Energy Association. "Americans' support for pure, clean energy is clear, and events such as this heighten the need for Congress to pass needed energy and climate legislation."

According to a recent national bipartisan poll, 89 percent of the voters believe that increasing the amount of energy America gets from wind is a good idea, Bode said.

Meanwhile, opinions about offshore oil drilling have begun to shift. In a U.S. poll in late May, 51 percent of respondents said the risks of offshore drilling outweigh the benefits.

And no surprise, President Obama's schedule today includes a meeting "with business leaders and energy experts to discuss energy reform," according to news reports.

Renewable energy technologies rely on virtually inexhaustible natural elements for their "fuel," and while some have proven too costly or technologically challenging to as yet gain widespread acceptance, others are already competitive.

The wind power industry, for example, has continued its explosive growth in the face of a global recession. In 2009, the total level of annual investment in clean energy was $145 billion, a 6.5-percent drop from the record previous year, while the global wind power market grew by an annual 41.5 percent.

Prior to the recession, investment in alternative energy had been rising swiftly. The global investment in clean energy projects in 2008 was four times what was spent in 2004. Renewable energy — solar, wind, biofuels and more — accounted for more than 40 percent of power generation capacity added during 2008.

"Americans' support for pure, clean energy is going to increase above its already overwhelming levels as a result of the oil spill," Bode added. "These are the types of events that force Congress to pass needed legislation."

Renewable energy sources currently account for roughly 13 percent of the world’s primary energy demand, but in optimistic scenarios could help support 80 percent by 2050. Wind power, solar power and fuels derived from biological matter, such as ethanol and biodiesel, could help create this future, analysts say.

"The Gulf oil spill is a heartbreaking catastrophe, and it demonstrates in stark terms why we need to accelerate the use of renewable energy alternative like ethanol," said Stephanie Dreyer, spokesperson for ethanol advocacy group Growth Energy. "The long-term ramifications of the oil spill are yet to be determined, but it definitely indicates a need for us to invest in alternative fuels in a renewable way and move away from oil."

Ethanol has raised controversy over the years, because it is currently derived from food crops, which can prove costly in terms of resources such as energy and water. However, scientists are hard at work in attempts to industrialize processes to derive it from prairie grass, leftover lumber and other sources of cellulose.

"We have ethanol production in place today — we have the capability to ramp it up and to open up markets for cellulosic ethanol," Dreyer said. "The positives for ethanol remain the same despite the spill, but the spill is really showing the risks of our addiction to oil. As oil becomes riskier and riskier to extract, ethanol is becoming cleaner and more efficient every single day."