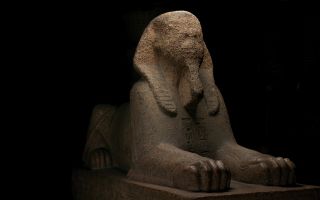 The red granite sphinx of Ramses II/Merneptah from Memphis, Egypt, was originally installed in the upper courtyard of the University of Pennsylvania Museum, circa 1915 to 1916.
(Image: © Penn Museum Archives)

An enormous stone sphinx representing the pharaoh Ramses II has spent nearly a century in the Egypt Gallery of the Penn Museum in Philadelphia. But today (June 12) the sphinx was relocated in "a monumental move" that saw the colossal statue "floating" on so-called air dollies — a technology that uses high-powered air compression in a manner similar to hoverboards, museum representatives said in a statement.

The sphinx's new location is in the museum's main entrance hall, where daylight will bathe the ancient statue for the first time since it arrived at the museum nearly a century ago.

The sphinx is more than 3,000 years old and weighs nearly 13 tons (11.8 metric tons). So, although its new home is only 250 feet (76 meters) from the spot where it has rested since 1926, the move posed unique challenges, museum representatives reported. [Photos: The Ram-Headed Sphinx of Gebel el-Silsila]

With its lion's body and human head, the red-granite sphinx represents the divine power of Ramses II. Though the head of the sphinx is heavily eroded, the body was buried in sand for thousands of years, which preserved much of the statue's original detail, according to the statement.

The sphinx was excavated from the Temple of the God Ptah at Memphis, Egypt, as a joint project between the Egyptian Antiquities Service, the Egypt Exploration Fund and the British School of Archaeology, and it sailed to the U.S. in 1913.

How do you transport such an enormous object? Penn Museum staff first 3D-scanned the sphinx, to calculate its weight and density. Then, they collaborated with engineers to determine how to safely move it.

The team decided that, first, the sphinx would be lifted up by hydraulic gantries — a system for moving heavy loads. It would then be placed on four air dollies that would "float" the sphinx to nearby scaffolding, where hydraulic gantries would hoist the massive statue into position on a track, The Philadelphia Inquirer reported.

Once on the track, the sphinx would be slowly and carefully nudged around a courtyard and through a window — with "inches to spare" — finally reaching its position in the museum's entry hall, according to the Inquirer. Video of the move, which was shared live on Facebook, demonstrated the painstaking slowness of the effort required to transport the hefty artifact.