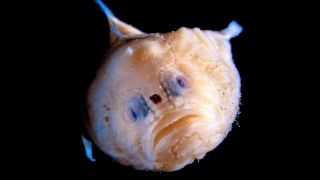 No wonder this fish looks like a grumpy, inflated balloon — it's been holding onto a mouthful of water for ages.

This odd little creature is known as the coffinfish (Chaunax endeavouri), and it lives in the deepest parts of the Pacific ocean. Researchers observed this "breath-holding" behavior for the first time while combing through publicly available videos captured by the National Oceanic and Atmospheric Administration's (NOAA) remotely operated vehicles, Science reported.

The scientists found footage of eight different individual coffinfish holding in the water they had taken in. [In Photos: Spooky Deep-Sea Creatures]

To get the necessary oxygen to survive, fish gulp down water (which is two parts hydrogen and one part oxygen), extract oxygen and then "exhale" the oxygen-depleted water by releasing it from their gills, Science reported. But these fish held onto that water in their large gill chambers for quite a long time, from 26 seconds up to 4 minutes, rather than releasing it immediately.

The scientists also took computed tomography (CT) scans of museum specimens of coffinfish to examine the massive gill chambers the animals use to hold water.

As to why the fish do this, the researchers have some guesses. They said breath-holding may help the fish conserve energy. It could even protect them by making them look bigger to predators, similar to what pufferfish accomplish by pushing out their stomachs. When a coffinfish holds in water, its body volume increases by 30%, according to the study.

The researchers reported their findings May 10 in the Journal of Fish Biology.