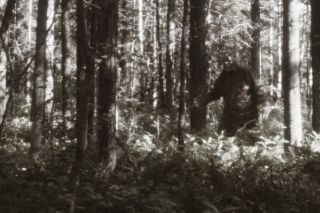 "Bigfoot" has an FBI file.
(Image: © RichVintage via Getty Images)

The U.S. government released Bigfoot's FBI file yesterday (June 5). It contains a few news clippings, and some formal letters to and from a monster hunter in the 1970s — leading to an examination of 15 hairs and some skin the hunter believed came from "a Bigfoot."

It appears that Peter Byrne, that monster hunter, first wrote to the FBI on Aug. 26, 1976. His note, printed on fancy letterhead reading "The Bigfoot Information Center and Exhibition," suggested that the FBI was in possession of flesh and hair belonging to a mysterious creature, possibly belonging to a "Bigfoot."

"Gentlemen," Byrne wrote, "Will you kindly, to set the record straight, once and for all, inform us if the FBI, has examined hair which might be that of a Bigfoot; when this took place, if it did take place; what the results of the analysis were." [Titanosaur Photos: Meet the Largest Dinosaur on Record]

He didn't indicate why he suspected that the FBI might have done such an analysis, only that, "from time to time we have been informed that hair, supposedly of a Bigfoot… has been examined by the FBI., and with the conclusion, as a report of the examination, that it was not possible to compare the hair with that of any known creature on this continent."

Byrne appears to have been concerned that the agency wouldn't take The Bigfoot Information Center seriously.

"Please understand that our research here is serious," he wrote, "That this is a serious question that needs answering."

He also assured the agency that they needn't worry about his implying their involvement in his work.

"An examination of hair, or the opposite, but the FBI., does not in any way, as far as we are concerned, suggest that the FBI., is associated with our project or confirms in any way the possibility of the existence of the creature(s) known as Bigfoot," he wrote.

More than two months later, on Nov. 24, 1976, Byrne replied. Perhaps emboldened by the earlier response, he asked not for information but for a favor. [Real or Not? The Science Behind 12 Unusual Sightings]

"Briefly, we do not often come across hair which we are unable to identify, and the hair that we have now, about 15 hairs attached to a tiny piece of skin, is the first that we have obtained in six years which we feel may be of importance," he wrote.

He asked if Cochran "could possibly arrange for a comparative analysis" of the tissue to determine its origin.

At the time all this was going on, Bigfoot was in the news. Byrne had been searching for the creature for five years, supported by the Academy of Applied Science (AAS), a small institution in Boston that, according to a document in the file, also sponsored hunts for the Loch Ness monster.

The New York Times had profiled the 50-year-old Byrne's adventures in June of 1976, calling him a "former professional hunter in Nepal who switched from tiger shooting and yeti hunting to tiger conservation and Bigfoot hunting."

"Most [Bigfoot sightings] are eventually discounted as insubstantial or faked," The New York Times wrote. "But a handful hold up and are given high credibility. So far Mr. Byrne, though he has never seen a Bigfoot himself, has collected the details of 94 reported sightings that seem believable. There are many more reports of tracks."

The paper recounted several of those supposedly more credible sightings, and a clipping of that article was included in the FBI file. The next document in the file, in chronological order, was Cochran's instruction to examine the hairs Byrne passed along.

"This does not represent a change in Bureau policy," a memorandum included in the file states, in an apparent effort to justify the decision. "The … Laboratory Branch has a history of making its unique services and expertise available to the Smithsonian Institution, other museums, universities and government agencies in archeological matters and in the interest of research and legitimate scientific inquiry." [The 25 Most Mysterious Archaeological Finds on Earth]

Unfortunately for Bigfoot hunters, the results weren't what they may have hoped. In 1977, the lab examined the 15 hairs. A final letter from Cochran, addressed to Howard S. Curtis, Executive Vice President of the AAS, read like this:

The hairs which you recently delivered to the FBI Laboratory on behalf of the Bigfoot Information Center and Exhibition have been examined by transmitted and incident light microscopy. The examination included a study of morphological characteristics such as root structure, medullary structure and cuticle thickness in addition to scale casts. Also the hairs were compared directly with hairs of known origin under a comparison microscope.

It was concluded as a result of these examinations that the hairs are of deer family origin.

The hair sample you submitted is being returned as an enclosure to this letter,

Curtis replied March 8, thanking Cochran and saying he'd pass the news on to Byrne when the monster hunter returned from Nepal.

You can read the full FBI Bigfoot file here.

Live Science has reached out to Byrne for additional comment, and will update this article if he replies.