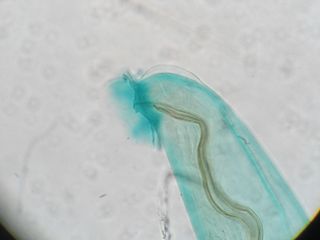 Last December, a tourist in Hawaii ate a slug on a dare — not realizing, of course, a wiggly brain-loving parasite was along for the ride.

After accidentally ingesting the larvae of the parasitic rat lungworm (Angiostrongylus cantonensis) that was hiding inside the slug, the person contracted angiostrongyliasis, or rat lungworm disease, becoming one of three recently confirmed cases of the infection, according to a May 23 statement from the Hawaii Department of Health.

This brings the total number of confirmed cases of this parasitic infection to 10 in 2018 and five in 2019. [The 10 Most Diabolical and Disgusting Parasites]

This parasite typically lays eggs in a rodent's pulmonary arteries — passageways for blood traveling from the heart to the lungs — and once those eggs hatch, the resulting larvae can travel up to the rodent’s throat area; the rodent then swallows them and poops them out, according to the Centers for Disease Control and Prevention. This parasite-packed poop becomes a meal for slugs and snails.

When the accidental host — a human — comes along and eats a raw or undercooked snail or slug, the parasite larvae can make their way up to the person’s brain (they also do this in rodents), where they mature into young adults.

Some people infected with this parasite don't have any symptoms, whereas others can develop a rare form of meningitis called eosinophilic meningitis. Symptoms include severe headache, stiff neck, low-grade fever, tingling or pain and vomiting. The symptoms usually begin one to three weeks after exposure to the parasite, according to the Hawaii Department of Health.

It's not clear how the two people were infected in Hawaii, but one remembers eating several homemade salads while in Hawaii and the other recalls eating unwashed raw fruits, vegetables or other plants straight from the land, according to the statement.

The Department of Health recommends washing all fruits and vegetables with clean water to remove tiny slugs or snails; controlling snail, slug and rat populations near homes, gardens and farms; and inspecting, washing and storing produce in sealed containers, according to the statement.