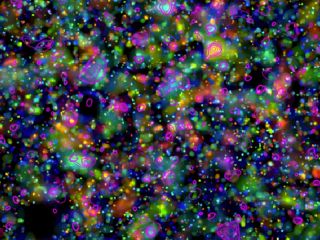 Here, an image showing the evolution of galaxy clusters in the universe.
(Image: © ESA)

At the very largest scales — zooming out from solar systems, stellar clusters and even galaxies — a surprising pattern emerges in nature. When you zoom out far enough that entire galaxies (each one home to hundreds of billions of stars) are just single dots of light, you'll find … a web. Long, thin ropes of galaxies millions of light-years long. Dense, compact, massive knots of thousands of galaxies — the clusters. Broad, thick walls and sheets of even more galaxies.

The cosmic web is the largest pattern found in nature. It completely fills the universe. It's an immense, vast, almost overbearing structure, yet it appears as fragile and delicate as strands of pure silk.

And sitting among the latticeworks of the web, between the walls and knots and filaments, are the great cosmic voids. Stretching anywhere from 20 million to hundreds of millions of light-years across, these are the true deserts of the cosmos, almost entirely devoid of matter. By sheer volume, most of our universe is simply … nothing.

And when it comes to understanding the universe, "nothing" is very powerful.

As vast, complex and terrifying as the cosmic web is, it has surprisingly humble origins and a pretty boring life story.

A long time ago (around 13.8 billion years before now), there was no comic web. There were no galaxies and no stars. There were just the fundamental components of the universe: dark matter, hydrogen, helium and a little sprinkling of lithium just for flavor. All this stuff was as homogenous as the milk you buy at the grocery store: pretty much evenly spread throughout the universe.

But there were tiny differences here and there. Some spots had more density. Some spots had less. And the denser spots had slightly more gravitational attraction than the less dense spots. So those heavier spots would pull on their neighbors, grow larger and develop even stronger gravity — and the process would continue.

Achingly slowly, over the course of hundreds of millions of years, the rich got richer and the poor got poorer. Matter flowed into the dense pockets, where it eventually coalesced into the first stars, galaxies and clusters. That matter had to come from somewhere, so as the cosmic web grew and evolved, the voids emptied out.

Related: The Universe: Big Bang to Now in 10 Easy Steps

Fossils of the universe

Of course, the voids are not entirely empty. There are some dim, scattered dwarf galaxies floating around inside these mostly empty areas. And dark matter and some hydrogen managed to cling to life inside those empty, parched stretches. But by and large, the voids really are void. And because of this voidiness, ironically, the voids are filled with one thing: dark energy.

This is the name we give to the accelerated expansion of the universe, as well as for whatever's causing it. We don't really know what dark energy is, but our best current guess is that it has something to do with the vacuum of space-time itself; where there's vacuum, there's dark energy. So, technically, there's dark energy in the room you're in right now, hanging out in all the little pockets of vacuum between and within atoms. But dark energy isn't very strong, so it's easily masked by the presence of pretty much anything else — matter, radiation, dirty socks in the corner, you name it.

You don't get to experience dark energy, because your environment is too full of stuff. But the voids? They're empty. There's nothing there to compete with dark energy, which means these areas are exactly where dark energy gets to play its game.

The accelerated expansion of our universe happens in the voids themselves, and these voids literally push on their surroundings, driving apart the galaxies and dissolving the great cosmic web that took billions of years to construct.

So, if you want to know about dark energy, one of the most mysterious facets of nature ever uncovered, first you must stare into the void.

Learn more by listening to the episode "Why Avoid the Cosmic Voids?" on the "Ask a Spaceman" podcast, available on iTunes and on the web at http://www.askaspaceman.com. Thanks to Christian C., Nick C., Joel B., Steve, Neeo Silver, @brian_delight, John R., Steve T., Raymond A., cyrilio, Campbell D., Karissa B., @sm_tr, Laura W., @infirmus, Gary P., Fud F. and Daniel for the questions that led to this piece! Ask your own question on Twitter using #AskASpaceman or by following Paul @PaulMattSutter and facebook.com/PaulMattSutter.

Paul M. Sutter is an astrophysicist at The Ohio State University, host of "Ask a Spaceman" and "Space Radio," and author of "Your Place in the Universe." Sutter contributed this article to Space.com's Expert Voices: Op-Ed & Insights.