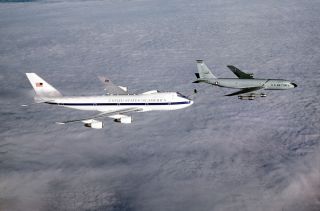 The Doomsday Plane can refuel while in flight.
(Image: © USAF via Getty Images)

The U.S. Air Force's E-4B, otherwise known as the "doomsday plane" may be able to withstand the force of a nuclear detonation.

This mostly windowless Boeing 747 was designed during the Cold War, and it indeed looks like a blast from the past, according to CNBC's Amanda Macias who recently got an inside look at the plane.

The craft is equipped with older analog flight instruments, rather than modern digital technology. The analog equipment is less likely to be fried by the electromagnetic pulse released after a nuclear blast, they reported. It also has shielding to protect its crew from nuclear and thermal effects during a nuclear war. [7 Technologies That Transformed Warfare]

With its giant fuel tanks and ability to refuel in the air from other aircraft, the doomsday plane can stay airborne for several days. It holds 67 satellite dishes and antennas, meaning its crew can communicate with anyone, anywhere in the world, even sending messages to the Navy's ballistic missile submarines, according to DefenseNews.

That being said, most of its capabilities are classified, according to CNBC. The Air Force has four of these E-4B aircraft, each standing at nearly 6 stories tall. Sporting 18 bunks, six bathrooms, a galley and a briefing room among other rooms, each can fly 112 crew members.

Currently, one is being used by Acting Defense Secretary Patrick Shanahan to travel to various parts of the world. On Tuesday morning (May 28), he boarded the craft in Maryland en route to Asia for a weeklong trip.