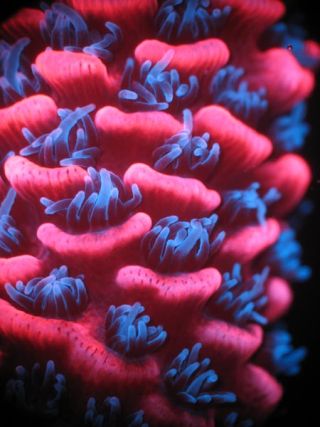 Biologist Mikhail Matz studies how corals evolve. He is hoping to catch evolution in action as corals adapt to the ever-changing ocean environment, which gets warmer and more acidic every year. Here, the natural fluorescence of Acropora millepora under a dissecting microscope. It is a rare morph with cyan-colored tentacles.
(Image: © Mikhail V. Matz, UT Austin and Jörg Wiedenmann, National Oceanography Centre, Southampton.)

Our oceans are getting warmer and more acidic every year; as a result, coral reefs are rapidly declining. Biologist Mikhail Matz is monitoring this process at the genomic level, in anticipation of evolutionary developments that may signal better news.

"Corals have a substantial potential to evolve, and this is the high time for them to do it," said Matz, assistant professor of integrative biology at The University of Texas at Austin and an expert on coral DNA. "I want to watch them very closely as it happens to see how evolution works."

Only a few years ago, studying an organism like coral through its genes would have been impossible because of the cost and time involved. Now, with the emergence of next-generation gene-sequencing devices, scientists are moving beyond mice, flies and worms — the traditional platforms for DNA research — to study the genetic makeup of a much wider variety of organisms.

In 2009, Matz and his team sequenced the entire transcriptome (the set of all RNA molecules, reflecting the genes at work at a particular moment) of a common Pacific coral for a fraction of the cost of previous efforts.  For Matz's purposes, the transcriptome is a better resource than the genome, providing a concise summary of the information relevant to the study of evolution. Matz's study was one of the first successful full-transcriptome sequences for a novel model organism.

However, sequencing an organism's transcriptome is only the beginning. The next step is interpreting the genetic data to make connections between genes and traits.

"How does the genome drive variation in gene function, and how does it lead to physiological modifications and eventually adaptation to the changing environment?" Matz asked. "We want to forge those links."

"Imagine someone having an evolution- or biomedicine-related question that can be best addressed using some obscure marine worm as a model," Matz explained. "We want to show how to do it – basically, how to elevate your favorite worm to the state of full-blown genomic model in a matter of several months."

Perhaps paradoxically, one of the biggest problems for biologists is that next-generation sequencers produce too much data. It takes the Texas Advanced Computing Center's Ranger supercomputer, with its massive size and speed, to make full sense of it.

Matz relies on Ranger’s power to experiment with various approaches, select optimal procedures, and eventually bring the analysis within the reach of standard desktop computers.

At the same time, Matz continues to analyze the coral results, waiting for the telltale genomic signs of evolution.

"The old corals are dying, yes, but that's a part of evolving. This may be horrible news, or this can be good news, all depending on how the next generation of corals turns out," Matz said. "Once we know how corals evolve, we might be able to help them in this, or at least avoid standing in evolution's way."