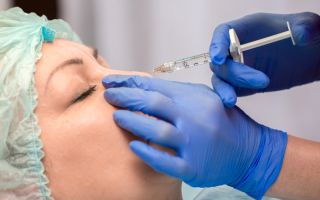 A stock photo of a woman receiving a "liquid nose job," a cosmetic procedure in which injections of facial fillers are used to change the appearance of the nose.
(Image: © Shutterstock)

A woman's simple cosmetic procedure turned serious when an injection of facial filler into her nose led to blockages in her eye's blood vessels — a rare complication, according to a new report of the case.

The 41-year-old woman was undergoing a "liquid nose job," a quick cosmetic procedure in which injections of filler substances are used to change the appearance of the nose.

But as soon as she received an injection with the filler — a substance called calcium hydroxyapatite — she felt "excruciating" pain in her left eye and experienced some vision loss, according to the report, published today (May 23) in the journal JAMA Ophthalmology.

The patient's symptoms continued for two weeks, leading her to seek a second opinion about her eye condition. By that time, she'd already received treatments with eye drops and a medication to help increase blood flow to the eye, which did not relieve the symptoms, said report co-author Dr. Lediana Goduni, an ophthalmology resident at New York University School of Medicine, who first saw the patient when she sought a second opinion. ['Eye' Can't Look: 9 Eyeball Injuries That Will Make You Squirm]

The sharpness of the woman's vision wasn't affected — she still had 20/20 vision in both eyes, the report said. But in her left eye, she had some loss in her "visual field," which is "like covering part of the eye with a curtain," Goduni told Live Science.

Imaging tests revealed that the woman had blockages (known medically as "infarctions") in a part of the eye called the choroid, a layer of blood vessels under the eye's retina, Goduni said. Then, using a type of high-resolution imaging called optical coherence tomography, doctors saw that there were small areas in the choroid that appeared "hyperreflective" on the image, Goduni said.

Goduni and colleagues suspect that "those little areas [are] the filler material," which contains calcium, a mineral that shows up as highly reflective on the image, she said.

In this case, it appears that the injected filler particles traveled to areas that were connected to the eye's blood vessels, leading to the blockage. This could happen if the filler injection needle was put into a major blood vessel of the face, Goduni said.

Goduni stressed that eye complications from facial filler injections are not common. "Given the number of [facial] injections that are happening, these are very rare complications," Goduni said. But "when they do happen, they can be very serious."

In severe cases, such blockages could cause complete blindness, she said.

Unfortunately, there is no treatment known to be effective for this condition. Although doctors have tried treating it with steroids or medications to lower pressure in the eye, there is little evidence that these treatments help, the report said.

The woman will continue to be monitored, but her condition isn’t expected to progress, Goduni said.

Because there's no way to treat these complications, the best thing to do is prevent them from happening in the first place, Goduni said. People seeking facial filler injections should choose their provider carefully and make sure the person is trained and knowledgeable about the blood vessel anatomy of the face, she said.