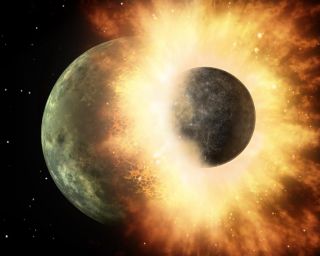 An artist's depiction of a celestial body crashing into the moon.
(Image: © NASA/JPL-Caltech)

The moon has two faces, and we may finally know why.

An ancient dwarf planet or asteroid may have crashed into our satellite, giving one side an extra layer of thick skin that is pockmarked with craters, a new study suggests.

Back in 2012, NASA's Gravity Recovery and Interior Laboratory (GRAIL) mission used a pair of small satellites to map details on the moon. Mission scientists found that the farside has an extra layer of material on the crust and is etched with craters, while its nearside is full of open basins. [Photo Shows Far Side of Moon Like Never Before]

A number of theories have attempted to explain this odd asymmetry. One theory holds that, a very long time ago, two moons that orbited our planet smooshed together. Another theory was that a large object collided with one side of the moon, altering its surface.

The new study, published Monday (May 20) in the Journal of Geophysical Research: Planets, provides evidence for the latter theory.

In the new study, scientists fed measurements from the GRAIL mission into a computer and ran 360 simulations of plausible cosmic collisions that could have caused the lunar asymmetry.

By "crashing" various-size objects at different speeds into the moon, they found that the most likely scenario to yield the weird lunar texture would have been a collision with an object that would have been about 480 miles (780 kilometers) in diameter. That is slightly smaller than the dwarf planet Ceres, according to a statement.

The object would have hit the near side of the moon at about 14,000 mph (22,500 km/h) and kicked up material that would have, like a tsunami, risen and fallen back onto the farside. That extra layer of debris would have been between 3 and 6 miles (4.8 to 9.7 km) thick — which is in line with the extra layer of material on the moon's farside that GRAIL detected.

In both cases, the object was likely a dwarf planet or an asteroid orbiting the sun and not likely that it was an early second moon orbiting the earth, lead researcher Meng Hua Zhu, of the Macau University of Science and Technology in China, said in the statement.

What's more, this might "explain the conundrum about isotopic differences between the Earth and Moon," the researchers wrote in the study. The moon has different isotopes, or forms, of potassium, phosphorus and rare-earth elements on its surface than does Earth. That’s odd, given that the moon likely split off from our own planet.