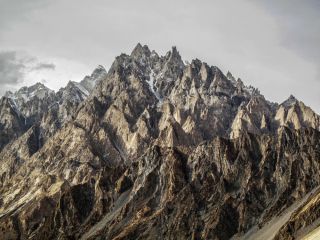 The Hindu Kush mountain range — which stretches about 500 miles (800 kilometers) along the border of Afghanistan and Pakistan — shudders with more than 100 earthquakes at a magnitude of 4.0 or greater every year. The area is one of the most seismically active spots in the world, especially for intermediate-depth quakes (tremors forming between 45 and 190 miles, or 70 and 300 km, below the planet's surface). And yet, scientists aren't sure why.

The mountains don't sit on a major fault line, where high earthquake activity is expected, and the region is many miles away from the slow-motion crash zone where the Eurasian and Indian tectonic plates are steadily colliding. So, what's the deal with this mountain earthquake epidemic?

A new study published April 17 in the journal Tectonics may have an answer to the mystery quakes of the Hindu Kush — and, like all great geologic mysteries, it involves blobs.

According to the study, the Hindu Kush mountains may owe their incredible seismic reputation to a long "blob" of rock slowly dripping away from the range's subterranean underbelly and into the hot, viscous mantle below. Like a lone water droplet pulling away from the edge of a faucet, the 100-mile-deep (150 km) blob of mountain may be pulling away from the continental crust at a rate as fast as 4 inches (10 centimeters) per year — and this subterranean stress could be triggering earthquakes, the authors of the new study wrote.

The researchers discovered the troublesome blob after collecting several years’ worth of earthquake observations near the Hindu Kush mountains. They saw that the quakes formed in a pattern, creating what looked like a "round patch" of seismic activity on the planet's surface, study co-author Rebecca Bendick, a geophysicist at the University of Montana in Missoula, told the website Eos.org. Those quakes also formed along a clear vertical axis, beginning between 100 and 140 miles (160 and 230 km) below the continent, and were most common deeper down, where the solid continental crust meets the hot, viscous upper mantle. Here, the researchers wrote, is where the slowly-stretching blob is strained the most.

All of these observations were consistent with a blob of solid rock slowly dripping into the gooey underworld below — a hypothesis that has previously been used to explain similar seismic activity underneath the Carpathian Mountains in central Europe. According to the researchers, the Hindu Kush blob likely began dripping no earlier than 10 million years ago, and continues to stretch downward nearly 10 times faster than the surface of the mountains move, as the Indian and Eurasian plates collide.

If accurate, these results may be more evidence that geophysical forces beyond just the subduction of tectonic plates can send earthquakes rattling through the planet. As it was best put in 1958: Beware of the blob.