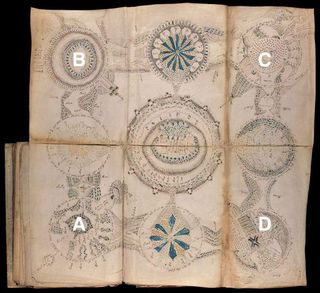 A foldout map in the manuscript depicts tells the tale of a rescue mission to save people from an erupting volcano in the Tyrrhenian Sea that began in February of 1444.
(Image: © Voynich manuscript)

A researcher in England claims he has cracked the code of the mysterious medieval Voynich manuscript — a work full of mystical drawings and indecipherable writing that was first discovered by an antique book dealer in 1912. But other experts are not sold on his claim.

Ever since the discovery, scholars have been trying to decipher the seemingly unrelated jumble of words and symbols printed on its 240 pages of animal-skin parchment. Now, Gerard Cheshire of the University of Bristol in England says that over a span of two weeks, he deciphered the text with a fittingly mysterious "combination of lateral thinking and ingenuity," according to a statement.

He claims that rather than just a mix of meaningless words and symbols, the manuscript was written in a proto-Romance language that was often used in medieval times, but rarely written in official documents, Cheshire reported April 29 in the journal Romance Studies.

Though this Romance language became obsolete long ago, "a significant vestige of the language has survived into the modern era, because its lexicon has been sequestered into the many modern languages of Mediterranean Europe," he wrote in the paper. [Voynich Manuscript: Images of the Unreadable Medieval Book]

The proto-Romance language used in the manuscript eventually gave rise to Romance languages such as Portuguese, Spanish, French and Italian, he said.

The alphabet of this language contains a combination of unfamiliar and familiar symbols, some words and abbreviations in Latin and no punctuation marks, aside for some marks on individual letters, Chesire explained in the study. What's more, all the letters are in lower case; there aren't any double consonants, but there are many double, triple, quadruple and even quintuple strings of vowels.

According to Cheshire, parts of the text reveal that the manuscript was compiled by a Dominican nun as a reference book for Maria of Castile, the Queen of Aragon in 15th-century Spain. According to his code cracking, the manuscript contains information on herbal remedies, therapeutic bathing and astrological readings; and it also talks about reproduction and parenting, among other topics.

But not all scholars are on board with the claim. Gordon Rugg, a researcher at Keele University in the U.K. who has spent decades studying the manuscript, does not think it could be written in a single language.

"If you're dealing with a text in a real language, you'll quickly start seeing regularities," Rugg told Live Science. For example, in English, the word "a" almost always occurs before a consonant and the word "an" before a noun. "Code breakers are well aware of features like this, so this is one of the first things they looked for, and these features don't occur in the Voynich manuscript," he added.

Another issue is what's called "statistical oddities," he said. For example, words in the first half of a line tend to be longer than words in the second half. "That's not something you'd expect from a real language." Rather, it could be a bunch of meaningless text designed to look like a language, he reported in 2016 in the journal Cryptologia. In other words, a medieval hoax.

"Anyone claiming that they've found a solution involving a real language would need to explain why the text shows these statistical oddities, rather than simply ignoring them," he added.