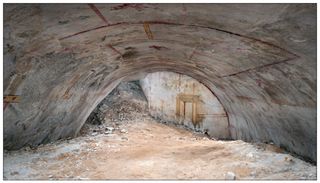 A hidden vault — filled with dirt and adorned with vivid paintings such as a centaur, a sphinx and an attacking panther — has been discovered in the ruins of Emperor Nero's ancient Roman palace.
(Image: © Parco Archeologico Del Colosseo)

Archaeologists have discovered a hidden vault in the ruins of Roman Emperor Nero's sprawling palace, hidden under the hills near Rome's ancient Colosseum. According to a statement (translated from Italian) from the Colosseum archeological park, which includes the palace's ruins, the chamber has sat hidden for nearly 2,000 years, likely dating to between A.D. 65 and A.D. 68.

The chamber, nicknamed the Sphinx Room, is richly adorned with murals of real and mythical creatures including — you guessed it — a sphinx. Painted in rich red, green and yellow pigments that have survived the last two millennia incredibly well, the vaulted room is also decorated with images of a centaur, the goat-rumped god Pan, myriad plant and water ornaments, and a scene of a sword-wielding man being attacked by a panther. [Was Emperor Nero's Evil Reputation 'Fake News'?]

According to the statement, the Sphinx Room was discovered accidentally, while researchers were setting up to restore a nearby chamber. The room's curved ceilings are 15 feet (4.5 meters) high, and much of the room is still filled in with dirt.

Nero began constructing his massive palace — known as the Domus Aurea, or "golden house" — in A.D. 64, after a devastating, six-day-long fire reduced two-thirds of Rome to ashes. That researchers are still uncovering new rooms in the Domus Aurea after hundreds of years of excavation (the ruins were first rediscovered in the 15th century) is no surprise. In its prime, the palace sprawled over four of Rome's famous seven hills, and is believed to have included at least 300 rooms.

Thanks, in part, to his narcissistic construction project, Nero's reputation suffered in the eyes of history, and he is remembered today as a power-mad despot. Following Nero's suicide in A.D. 68, much of his palace was looted, filled with earth, and built over.

One of the palace's central features, a large manmade lake, was eventually covered up by the Flavian Amphitheater — better known as the Roman Colosseum — in A.D. 70. Thanks to the lake's infrastructure, the bottom of the Colosseum was occasionally flooded to wage mock naval battles, bringing glory to the mad emperor's successors.