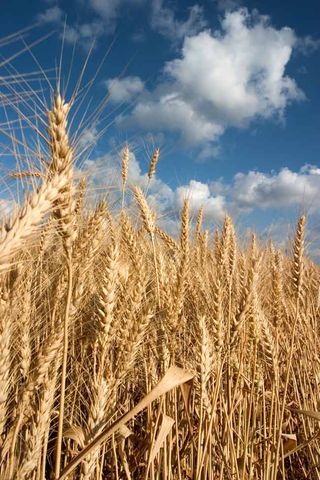 The price of wheat, as well as that of rice, corn and other crops, has dramatically risen in recent times.

A strange 300-foot pattern of circles and lines recently appeared in a farmer's field in the English countryside near Wiltshire, a place long associated with mysteries such as crop circles and Stonehenge. According to crop circle researcher Lucy Pringle the pattern contains a hidden code for a complex mathematical equation called Euler's Identity, considered by many to be among the world's most beautiful and elegant theorems.

This is not the first time that images and concepts from advanced mathematics have appeared in farmers' fields. Crop circle designs containing fractal patterns (such as the Mandelbrot set) have been created for many years.

There are many theories about what creates crop circles, from unknown Earth energies to extraterrestrials. The idea that patterns in crops would contain mathematical elements seems very mysterious to many crop circle aficionados. After all, it proves that some sort of intelligence is behind the design. If the design was merely a rough circle one might hypothesize that wind patterns or lightning or some other natural, known phenomenon was somehow responsible. A mathematical equation, on the other hand, requires intelligence.

Spooky and mysterious indeed—unless, of course, the patterns were made by humans.

The mystery vanishes if hoaxers—the only things proven to create crop circles—made the recent one as well. Anyone with access to the Internet can easily find sophisticated mathematical shapes to use as blueprints for making crop circles.

Dr. John Talbot, a mathematician at University College London, noted that the hoaxers actually made a mistake in creating Euler's Identity. Talbot, interviewed by The Independent Online, noted an error in part of the equation and even found some very human humor in the supposedly alien pattern: "One of the discrepancies is that one part of the formula translates as 'hi' rather than 'i,' which could be somebody's idea of a joke." So either the aliens who traveled across the universe to make a pattern in an English farmer's field misunderstood Euler's Identity, or perhaps merry pranksters tossed a joke into their design for fun.

Many people believe that crop circles have been seen for centuries, but the first ones appeared only in the 1970s. Their origin remained a mystery until September 1991, when two men confessed that they had created the patterns for decades as a prank to make people think UFOs had landed. They never claimed to have made all the circles—many were copycat pranks done by others—but their hoax launched the crop circle phenomena.

The patterns began as simple circles (hence their name) but became increasingly complex over the years as hoaxers tried to outdo each other. Given the history of crop circles, it's not surprising that the latest pattern would contain a complex mathematical code—and surely there will be more to come.

Benjamin Radford is managing editor of the Skeptical Inquirer science magazine. He is co-host of the MonsterTalk podcast, and his new book Scientific Paranormal Investigation has just been released; this and his other books and projects can be found on his website. His Bad Science column appears regularly on LiveScience.