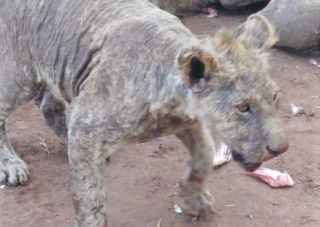 Neglected lions with mange and other illnesses were discovered at a breeding facility in South Africa.
(Image: © Conservation Action Trust)

More than 100 lions at a captive breeding facility in South Africa have been found to be neglected, ill and covered with mange.

According to the Humane Society International, the lions were discovered on April 11 by inspectors with the National Council of Societies for the Prevention of Cruelty to Animals. Inspectors told TimesLive, a South African news site, that two lion cubs were suffering from neurological problems and couldn't walk and that 27 lions had lost much of their fur because of the mange, which is caused by parasitic mites.

"Other issues — such as small enclosures and inadequate shelter, no provision of water, overcrowding, and filthy and parasitic conditions — were noted in the camps that contained the lions, caracals, tigers and leopards," senior inspector Douglas Wolhuter told the news site. [In Photos: The Lions of Kenya's Masai Mara]

Animal cruelty groups that oppose captive breeding of lions were quick to condemn the site, Pienika Farm in South Africa's North West province. Audrey Delsink, the wildlife director of the Humane Society International, said in a statement that lion cubs taken from their mothers are often passed off as orphans at the facilities. The animals are then hand-reared and semitamed so that they can be used as a tourist attraction for visitors who want to feed or pet a lion.

"Once [the animals become] too big and dangerous for these activities, these lions are then killed for their bones, which are exported to Asia for traditional medicines, or [the lions are] sold to be killed by trophy hunters, largely from the United States, in 'canned' hunts in which hand-reared lions are shot in a fenced area from which they cannot escape," Delsink said.

The owner of Pienika Farm, Jan Steinman, faces criminal charges for animal cruelty, according to the U.K. newspaper The Times. Steinman is a councilwoman of the South African Predator Association, a body that sets the standards for animal welfare at lion-breeding facilities.