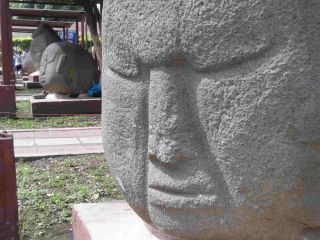 Ancient stone "potbelly" sculptures on display in a park in Guatemala are magnetized on certain spots, suggesting the pre-Columbian civilization that made them had a practical knowledge of magnetism.

Eleven of these sculptures of giant heads and distorted bodies, known as "potbellies" because of their distinctive rotund shapes, are on display in a plaza in the small town of La Democracia, near Guatemala's Pacific coast. They were installed there in the 1970s after being brought from ancient sites in the nearby Monte Alto region.

Guatemalans are thought to have created these potbelly sculptures more than 2,000 years ago, which would date them to the Late Preclassic period of Mesoamerican civilizations. Previous studies of the sculptures had suggested several had magnetic anomalies on their surfaces. [The 25 Most Mysterious Archaeological Finds on Earth]

In the new research, a team led by scientists at Harvard University studied the potbellies with both a handheld magnetometer and a portable scanning magnetometer that could be fixed to the sculptures to provide detailed magnetic mapping of their surfaces.

What's more, many of the giant heads and bodies of the ancient sculptures were carved to make the magnetic anomalies align with either the sculptures' right cheeks or their belly buttons — suggesting that ancient sculptors knew how to detect magnetism, and that they had selected magnetic boulders to highlight these parts of the body.

The finding gives strength to a theory that early Mesoamerican civilizations knew about the attractive properties of magnetism, and how to detect it with magnetic objects like lodestones suspended on a string — possibly even before magnetism is first known to have been described in China about 2,700 years ago.

It is not known for certain why those body parts were chosen, but it's likely that the magnetism of the sculptures contributed to their cultural influence.

"Potbellies may have represented the ancestors of the ruling class and given physical form to their heredity-based claim on power," the researchers wrote in their study. "If this interpretation is correct, the ability of potbellies to deflect, dramatically in most cases, a suspended lodestone would have served to reinforce their message of living ancestral continuity."

Art historian Julia Guernsey, a professor at the University of Texas at Austin who has written a book about Guatemalan potbelly sculptures, is enthusiastic about the new research.

"Their results speak to the significance of stone in ancient Mesoamerica and its symbolic properties, but also to ancient understandings of human bodies and beliefs that certain key features — like faces or stomachs and navels — were particularly potent or powerful," she said.

The research will be published in the June issue of the Journal of Archaeological Science.