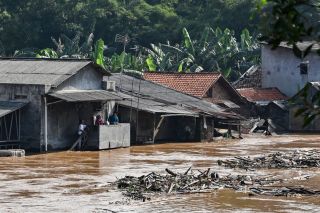 Residents in Jakarta stay on the second floor of their house amid floodwaters due to heavy rainfall in on April 26, 2019.
(Image: © BAY ISMOYO/AFP/Getty Images)

The president of Indonesia wants to move the country's capital, Jakarta, to another location off the main island of Java, in part because the city of more than 10 million is sinking into the sea, according to news reports.

The decision is in part due to research finding that parts of Jakarta will be completely submerged in just decades. [8 Ways Global Warming Is Already Changing the World]

"If we look at our models, by 2050 about 95% of North Jakarta will be submerged," Heri Andreas, a researcher at the Bandung Institute of Technology who studies Jakarta's land subsidence, told BBC News.

The surrounding Java Sea is also rising as a result of climate change, though that’s not happening quite as quickly as the land is subsiding, The New York Times reported in 2017.

Overcrowding and related traffic congestion — which has meant government ministers needing police escorts to get to meetings on time — also played roles in the decision to relocate the capital.

Widodo presented a preliminary relocation study to the National Development Planning Agency, also called Bappenas, during a cabinet meeting Monday (April 29), according to The Jakarta Post.

As for when the capital would move and where are not known. Since Indonesia gained its independence from the Dutch in 1945, its leaders have tried several times to do this with no success, according to the BBC.

The Bappenas head provided three alternatives to the Jakarta location at the meeting, according to the Post.

One idea is to establish a special government hub around the Presidential Palace and the National Monument in Jakarta, to improve efficiency. Another alternative floated is to move the capital about 31 to 43 miles (50 to 70 kilometers) outside Jakarta. The third option, which is the one the president has chosen, would be to relocate the capital completely off the island of Java.

That move would address the sinking as well as overcrowding, and potentially help spread economic opportunities beyond the megacity.

"We want to have a capital that represents the nation's identity and improves the efficiency of the central government and establish a smart, green and beautiful city," Bappenas head Bambang Brodjonegoro said during a press conference, the Post reported. "The capital relocation must serve the strategic vision of our long-term development agenda."

The main candidate for this third option is Palangkaraya, which is located in central Kalimantan on Indonesia's part of Borneo, the Post reported.