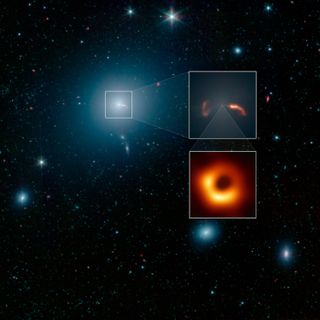 A NASA image shows the M87 galaxy, in the middle of which is the black hole that was imaged for the first time earlier this month (bottom-most box). The top zoomed-in box shows the shockwaves caused by jets of plasma spewed out from the black hole.
(Image: © NASA/JPL-Caltech/IPAC/Event Horizon Telescope Collaboration)

The supermassive black hole, M87 — dubbed Pōwehi — lives 55 million light-years away from Earth in a galaxy called Messier 87. The new image of M87 was released by NASA's Jet Propulsion Laboratory.

Supermassive black holes gobble up everything around them. But some particles don't fall into the black hole and instead — for reasons still unknown to scientists — are propelled out of the hole at a high speed, in opposite directions. [All Your Questions About the New Black Hole Image Answered]

When the particles in these high-speed jets interact with gas in the vast, empty space around a black hole, the particles slow down and create shockwaves.Those shockwaves give off radiation that our devices can detect.

This photo of M87 shows those shockwaves created by the jets flying out of Pōwehi's grasp — one aiming almost straight toward our planet and the other flying away from Earth, according to a statement from NASA’s Jet Propulsion Laboratory.

The high-speed jet that's racing toward Earth is visible on the right of the zoomed-in photo. The straight part of the line reveals the high-speed jet itself; where the line begins to curve — because the particles are slowing down — is where the shockwave begins.

The brightness of the jet is amplified because it's traveling at high speed in our direction, according to the statement. But the jet traveling in the opposite direction (on the left-hand side of the image) is moving so quickly away from us that it's invisible. The shockwave it creates, however, is visible and resembles the letter "C."

NASA's Spitzer Space Telescope measured the infrared light emanating from this galaxy. That’s in contrast to the radio waves that were stitched together to produce the first-ever photo of a black hole, which was released earlier this month.

These jets are not a new discovery, however. Astronomer Heber Curtis first discovered "a curious straight ray" emanating from the center of M87 more than a century ago, according to the statement. Since then, astronomers have been working to understand how and why they form.