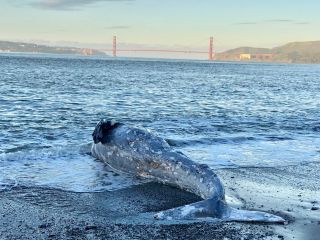 For a few months twice a year, the waters off California are home to graceful gray whales migrating north or south between the coast of Mexico and the Bering Sea. This year, however, it seems that fewer whales are surviving the journey north.

Those numbers are unusually high, said Justin Greenman, the California assistant marine mammal coordinator for the National Oceanographic and Atmospheric Association (NOAA). "If you just look at historical data for those first four months, we're at our third highest year-to-date," Greenman said. [Whale Album: Giants of the Deep]

The search for food

Gray whales (Eschrichtius robustus) make one of the largest migrations of any species. Seeing them on the West Coast this time of year is expected; the whales cruise by California, Oregon and Washington between March and early June on their trip north from the coast of Baja California, Mexico, to the cool, food-rich waters of the Bering and Chukchi seas, north of Alaska. They'll make their return trip south, back to Mexico, in December and January.

All along the West Coast, biologists and citizen scientists watch for the dappled whales, recording their numbers and tracking their behavior, Greenman said. This year, there have been far more reports of gray whales swimming closer to shore and spending more time in bays, marinas and harbors. "It seems like they're trying to feed [in those locations] because they're so skinny and emaciated," he said.

In Northern California, three out of four of the dead whales that have been examined so far appear to have died of starvation and the fourth was killed by a ship strike, said Barbie Halaska, a research assistant at The Marine Mammal Center (TMMC), a nonprofit organization that rescues and rehabilitates marine mammals in California. Halaska and her colleagues necropsied the four whales — three yearlings and one adult male — and plan to examine the remaining dead whales in the region in the next couple of days.

Gray whales were once severely threatened by whalers. There were only around 2,000 of them left in 1946, when an international agreement to stop gray whale hunting began, in order to help the population recover, according to TMMC. Gray whales were removed from the endangered species list in 1994 and TMMC estimates there are now around 26,000 gray whales in the Pacific Ocean, which is about how many there were before the whaling boom gained steam almost 200 years ago.

Although the gray whale population has recovered from near-extinction, the number of dead whales washing up this year is alarming, Halaska said. Climate change and declining fish stocks are likely key factors in the whales' poor health, she said.

Halaska and Greenman both emphasized that boaters and beachgoers on the West Coast should keep their eyes peeled for gray whales this time of year. If you see a gray whale or other marine mammal that's dead or in distress, notify the U.S. Coast Guard or call 1-877-SOS-WHAL(e) (1-877-767-9425). The Marine Mammal Center can also be reached directly at 415-289-SEAL (7325).

"We try to get out there as soon as possible to examine everything," Halaska said. "Every whale will tell a story."