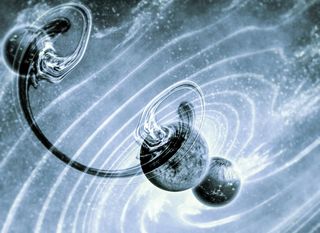 DENVER — Researchers have developed a new, unspeakably dangerous, and incredibly slow method of crossing the universe. It involves wormholes linking special black holes that probably don't exist. And it might explain what's really going on when physicists quantum-teleport information from one point to another — from the perspective of the teleported bit of information.

Daniel Jafferis, a Harvard University physicist, described the proposed method at a talk April 13 here at a meeting of the American Physical Society. This method, he told his assembled colleagues, involves two black holes that are entangled so that they are connected across space and time.

Their idea solves a long-standing problem: When something enters a wormhole, it requires negative energy to exit the other side. (Under normal circumstances, the shape of space-time at a wormhole's exit make it impossible to pass through. But a substance with negative energy could, in theory, overcome that obstacle.) But nothing in the physics of gravity and space-time — the physics that describes wormholes — allows for those sorts of negative-energy pulses. So wormholes are impossible to actually pass through.

"It's just a connection in space, but, if you try to get through it, it collapses too quickly so you can't get through it," Jafferis told Live Science after his talk. [9 Ideas About Black Holes That Will Blow Your Mind]

This older model of wormhole dates back to a paper by Albert Einstein and Nathan Rosen, published in Physical Review in 1935. The two physicists realized that, under certain circumstances, relativity would dictate that space-time would curve so extremely that a sort of tunnel (or "bridge") would form linking two separate points.

The physicists wrote the paper in part to exclude the possibility of black holes in the universe. But in the decades since, as physicists came to realize that black holes do exist, the standard image of a wormhole became a tunnel where the two openings appear as black holes. However, according to this idea, such as tunnel would likely never exist naturally in the universe, and if it did exist would disappear before anything passed through it. In the 1980s, the physicist Kip Thorne wrote that something might be able to pass through this wormhole if some sort of negative energy were applied to hold the wormhole open.

Jafferis, along with the Harvard physicist Ping Gao and the Stanford physicist Aron Wall, have developed a way to apply a version of negative energy that relies on an idea from a very different area of physics, called entanglement.

Entanglement comes from quantum mechanics, not relativity. Back in 1935, Albert Einstein, Boris Podolsky and Nathan Rosen published another paper in Physical Review showing that under the rules of quantum mechanics particles can become "correlated" with one another, such that the behavior of one particle directly impacts the behavior of another. [The 18 Biggest Unsolved Mysteries in Physics]

Einstein, Podolsky, and Rosen thought this proved something was wrong with their ideas of quantum mechanics, because it would allow information to move faster than the speed of light between the two particles. Now, physicists know that entanglement is real, and quantum teleportation is an almost routine part of physics research.

Here's how quantum teleportation works: Entangle two light particles, A and B. Then, give B to your friend to take into another room. Next, bash a third photon, C, against photon A. That entangles A and C, and breaks the entanglement between A and B. You can then measure the combined state of A and C — which is different from the original states of A, B or C — and communicate the results of the combined particles to your friend in the next room.

Without knowing the state of B, your friend can then use that limited information to manipulate B to produce the state particle C had at the start of the process. If she measures B, she'll learn the original state of C, without anyone telling her. Information about particle C functionally teleported from one room to the next.

This is useful, because it can act as a kind of uncrackable code for sending messages from one point to the next.

And entanglement isn't just a property of individual particles. Larger objects can become entangled too, though perfect entanglement between them is much harder.

Entangled black holes can transport you

Back in 1935, the physicists writing these papers had no inkling that wormholes and entanglement were connected, Jafferis said. But in 2013, physicists Juan Maldacena and Leonard Susskind published a paper in the journal Progress in Physics linking the two ideas. Two perfectly entangled black holes, they argued, would act as a wormhole between their two points in space. They called the idea "ER=EPR," because it linked the Einstein-Rosen paper with the Einstein-Podolsky-Rosen paper.

Asked if two fully entangled black holes might really exist in the universe, Jafferis said, "No, no, certainly not."

It's not that the situation is physically impossible. It's just too precise and huge for our messy universe to produce. Producing two perfectly entangled black holes would be like winning the lottery, only zillions upon zillions of times less likely.

And if they did exist, he said, they'd lose their perfect correlation the moment some third object interacted with one of them.

But if, somehow, such a pair were to exist, somehow, somewhere, then Jafferis, Gao and Wall's method might work.

From his perspective, Jafferis said, she would have dived into a wormhole. And as she approached the singularity at its neck, she would have experienced a "pulse" of negative energy that would have propelled her out the other side. [What Would Happen If You Fell into a Black Hole?]

The method isn't particularly useful, Jafferis said, because it would always be slower than just physically moving the distance between the two black holes. But it does suggest something about the universe.

From the perspective of a bit of information passing between entangled particles, Jafferis said, something similar might be going on. At the scale of individual quantum objects, he said, it doesn't really make sense to talk about space-time curving to produce a wormhole. But involve a few more particles in the mix for a slightly more complex bit of quantum teleportation, and suddenly the wormhole model makes a lot of sense. There's strong evidence here, he said, that the two phenomena are linked.

It also strongly suggests, he said, that information lost to a black hole might go somewhere where it could one day be retrieved.

If you fall into a black hole tomorrow, he said, all hope isn't lost. A sufficiently advanced civilization might be able to zoom around the universe, collecting all the Hawking radiation emitted from the black hole as it slowly evaporated over eons, and compressing that radiation into a new black hole, entangled with the original across time. Once that new black hole emerged, it might be possible to retrieve you from it.

Theoretical research into this method of moving between black holes, Jafferis said, is ongoing. But the goal is more to understand fundamental physics than perform black hole rescues. So, perhaps it's best not to risk it.