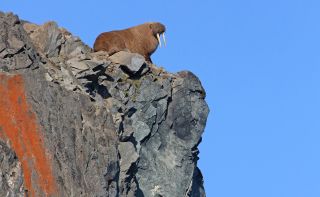 A Pacific walrus rests at the top of steep cliffs in Russia.
(Image: © Sophie Lanfear/Silverback/Netflix)

Netflix released a documentary series called "Our Planet" on April 5 that sits in the pantheon of great wildlife docs alongside BBC's "Planet Earth" and "Blue Planet." The new series stands out, though, because it explicitly shows how every ecosystem it highlights is being changed and threatened by climate change. And it includes one especially unsettling scene: Russian walruses tumble brutally down cliff sides to their deaths, one after another.

David Attenborough, the series' narrator, blames the incident on changes to the Arctic ecosystem that walruses inhabit. With sea ice receding year after year, he says, the walruses are forced to rest on crowded, tiny beaches. Those beaches are so overcrowded, he says, that some of the walruses scale cliffs for a bit of peace. But when the lumbering animals, unaccustomed to climbing or to heights, decide to return to the water, they wander right off the edge of the cliffs to their horrible deaths.

It's a shocking scene and a compelling story. [In Photos: A Conveyor Belt for Arctic Sea Ice]

So, did climate change really drive the walruses up the cliffs and to their deaths?

Here's what Live Science found out:

This incident isn't the first time people have documented the mass-falling deaths of walruses. Back in 1996, Alaskan wildlife officials reported a then-nearly unprecedented incident in which nearly 60 male walruses fell to their deaths off a 200-foot (60 meters) cliff side in the state. At the time, when sea ice was still more extensive and climate impacts less well-understood, researchers didn't blame the deaths on climate change. Rather, they were perplexed, without an answer to explain the behavior, The New York Times reported at the time. The years since have seen further reports of these sorts of walrus events.

But more-recent research has indicated that climate change could be driving deadly "disturbances" at walrus "haul-outs" in exactly the way the documentary indicates. Walruses typically spend most of their time on sea ice, with some intermittent time spent on land in large groups called haul-outs.

A May 2017 report from the U.S. Fish and Wildlife Service (USFWS) found that the retreat of sea ice from the Arctic does indeed lead walruses to engage in mass haul-outs onto crowded beaches more often. And at those crowded haul-outs, the walruses are indeed easily spooked, with an increase in deadly "disturbance" events — though tramplings, especially of young calves, are much more common than cliff falls, according to that report.

Subject matter experts suggested to Live Science that falling events typically don't involve the walruses scaling cliffs as the documentary indicated. Rather, the events happen as walruses go up shallow slopes on the cliffs' far sides. Once up top, the creatures can sometimes stampede off these cliff sides if a passing plane, polar bear, boat or other unfamiliar freaky thing scares them.

Climate change does seem to have made these sorts of events more common. However, in Alaska these mass fallings appear to local observers to have declined in recent years thanks to human efforts to manage the environments of the haul-outs. Reductions in overhead planes and other human disturbances appear to have prevented at least some of the deaths. Coastal management efforts, led by local native groups, have also been effective to some degree.

The USFWS report found that even as their populations have struggled with calf deaths, reduced sea ice and poorer foraging opportunities, walruses are a comparatively resilient species. At least at the level sea ice has reduced to so far, the animals seem able to weather the many human encroachments on their territory, the report said.