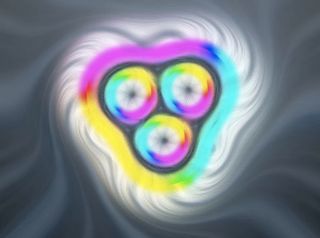 This image comes from a computer simulation of a skyrmion bag containing three skyrmions. White represents magnetic field lines pointing up, black represents lines pointing down, and other colors represent other directions.
(Image: © University of Birmingham)

There are ghostly shapes hidden in magnetic fields.

They're not made of stuff in the way a lightning bolt or a beam of light is. A lighting bolt carries a fairly defined group of electrons from the sky all the way to the ground. Sunshine that hits your face consists mostly of the same photons that traveled millions of miles from the sun.

Physicists call these skyrmions "quasiparticles," and suspect they could explain phenomena as disparate as ball lightning and the nuclear structure of an atom. Now, in a new paper, researchers showed that skyrmions can be stuffed inside one another, taking on a completely new shape. These puffed-up "skyrmion bags" are fascinating objects in their own right, but the bizarre things might also be useful for futuristic computing, the researchers said.

Stuff 'em in a bag

The team revealed the skyrmion bags in a paper published April 1 in the journal Nature Physics. The result relies on a key similarity between the ghostly quasiparticles and solid matter: the existence of antiparticles.

Just like protons have counterpart antiprotons that annihilate each other on contact with each other, skyrmions have antiskyrmions.

"An antiskyrmion is a skyrmion where all the numbers are reversed," said David Foster, a physicist at the University of Birmingham in England and one of the lead authors of the new study.

So, if a magnetic field line points north in a skyrmion, it would point south in an antiskyrmion. But antiskyrmions and skyrmions powerfully repel one another. That turned out to be the key to building skyrmion bags, the researchers said.

"If I take a skyrmion and I stretch it out a bit and I take an antiskyrmion and place it in the center of it [the skyrmion] … they will not annihilate. It's a stable construction," Foster told Live Science.

What's more, the researchers realized, once a skyrmion has been stretched, you can stuff even more antiskyrmions inside it.

And that realization, Foster said, opened the door again to a six-year-old idea about putting skyrmions to work.

Back in 2013, a trio of researchers proposed a theoretical "skyrmion racetrack memory device" in the journal Nature Nanotechnology.

The idea was that the little magnetic patterns might offer a solution to a basic problem in computer design: electricity consumption.

"If you consider an old-fashioned hard drive, which is a sort of spinning disk, it takes a lot of power," Foster said.

The 2013 researchers' proposed low-power replacement would take advantage of the fact that a very small current causes skyrmions on a magnetic surface to scoot along rapidly.

Perhaps, those researchers suggested, if you took a long, thin strip of magnetic material (the racetrack) and loaded it with skyrmions, you could encode data into the magnetic material in gaps between the quasiparticles. A magnetic reader could interpret a long gap between skyrmions as a binary 1 and a short gap as a binary 0, for example.

To retrieve that stored data, then, an electric current could nudge the skyrmions into scooting back and forth under a magnetic reader. It takes very little power to move skyrmions back and forth along a magnetic surface, so the resulting device could be very efficient.

But the idea had some basic problems, Foster said. While skyrmions are fairly stable, the gaps between them aren't. Over time, imperfections in the magnetic strips would muddle the data as the skyrmions moved back and forth.

"Stray magnetic fields come in. And this is like speed bumps which appear and disappear. And with those gaps appearing and disappearing, the gaps between your [skyrmions] will have been lost," Foster said.

How bags could solve the problem

The really interesting thing here, Foster said, is that skyrmion bags don't lose antiskyrmions over time or when they pass over magnetic "speed bumps."

Put a bunch of skyrmion bags on a racetrack device, the researchers in the new study wrote, and a computer could encode and retrieve data based on the number of antiskyrmions in each bag that pass under the reader.

"My colleagues are really excited about the idea that you could also increase data density this way," Foster said. [9 Numbers That Are Cooler Than Pi]

Where conventional computer storage relies on only 1s and 0s, he said, a skyrmion bag system could use 0s, 1s, 2s, 3s and so on. That would open the door to much more complex forms of data encoding that could stuff far more information into a given space than a traditional binary method can.

No one's yet managed to make a skyrmion bag on a magnetic strip. But after testing the concept using computer simulations, Foster and his team in the U.K. turned to a group of researchers at the University of Colorado to bring the first known skyrmion bags into the world.

Typically, physicists think of skyrmions as things that exist in magnetic fields. But the particles can also exist in other substances, like the liquid crystals — aligned, rigid, rod-like molecules — that fill the screens on your laptop and some cellphones. [Images: Inside the World's Top Physics Labs]

With precision "optical tweezers," the University of Colorado team (headed by the experimentalist Ivan Smalyukh) "drew" skyrmion bags in the liquid crystal, said Jung-Shen Tai, a physics graduate student in the lab.

These skyrmion bags remained indelible in the crystalline substance and visible when the researchers peered at them through microscopes. That (along with the computer simulation) is strong evidence that skyrmion bags would also be stable in magnets, Foster said.

"I already know people are working on grants to make these things," he said.