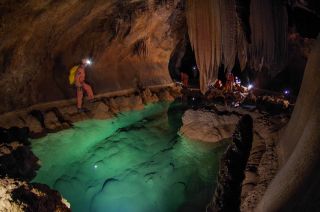 An international team of astronauts has discovered a new species of blind, colorless, cave-dwelling crustacean — and they didn't even have to leave Earth to find it.

The fingernail-size crustacean, named Alpioniscus sideralis after the Latin word for "stellar," was discovered scuttling about a pitch-black pool in the Sa Grutta cave system below Sardinia, Italy. Fledgling astronauts discovered the tiny cave-dweller while spending six nights belowground as part of the European Space Agency's CAVES training program, which encourages International Space Station candidates to conduct research together in perilous subterranean environments.

During a 2012 expedition underground, astronaut trainees from Europe, the United States, Russia, Canada, Japan and China encountered the tiny, translucent crustaceans in a small cave pond. The astronauts lured the creatures out of the water using a bait of liver and rotten cheese, then transported the specimens back to the surface. [In Images: Creepy, Crawly Cave Creatures]

Molecular analysis showed that A. sideralis' genetics didn't match that of any other species collected from the region, allowing the intrepid astronauts to describe it for the first time in a new study published December 2018 in the journal ZooKeys.

A. sideralis was revealed to be a type of woodlice — tiny crustaceans that left the water to colonize land millions of years ago. Remarkably, A. sideralis seems to have done an evolutionary about-face, turning its armored back on the land and returning to subterranean waters like the cave pools of Sardinia.

"I would like to think that when humans land on Mars and explore its caves, this experience will help them to look for other species, knowing that life has few limits and can develop in the most inhospitable places," Paolo Marcia, a zoologist from the University of Sassari and co-author of the study, said in a statement.