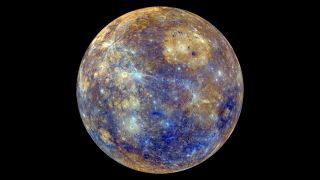 What is the closest planet to Earth? The answer most people would give is Venus. But … it might actually be Mercury.

Although Venus is the planet that comes closest to Earth as it sweeps by on its orbit, Mercury stays the closest to Earth the longest, according to a commentary published Tuesday (March 12) in the magazine Physics Today.

"By some phenomenon of carelessness, ambiguity, or groupthink, science popularizers have disseminated information based on a flawed assumption about the average distance between planets," Tom Stockman, a Ph.D. student at the University of Alabama; Gabriel Monroe, a mechanical engineer at the U.S. Army's Engineer Research and Development Center; and Samuel Cordner, a mechanical engineer at NASA wrote in the commentary. [See Photos of Meteorites from Around the World]

In the commentary, the researchers devised a new mathematical technique, called the point-circle method, to measure the distances between planets. This method averages the distance between a bunch of points on each planet's orbit, thereby taking time into consideration.

When measured that way, Mercury was closest to Earth most of the time. Not only that, but Mercury was also the closest planet to Saturn, and Neptune, and all of the other planets. The researchers checked their findings by mapping out where the planets were in their orbits every 24 hours for 10,000 years.

However, not everyone agrees with this new definition of "closest" planet.

"Suppose you live in a house where the people who live next door to you spend half the year someplace, maybe you live in Wisconsin and your nearest neighbors spend seven months of the long winters in Florida," said Steven Beckwith, the director of the Space Science Laboratory and professor of astronomy at UC Berkeley, who was not part of the commentary. "During the winter, the people in the next house over would be closer to you."

But most people would still say that their closest neighbors are the ones who live immediately next door for the rest of the year, Beckwith told Live Science. "It is an interesting way of redefining 'closest,' but it is hardly profound."