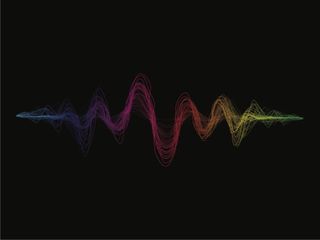 Scientists have seen something magical happening inside graphite, the stuff that your pencil lead is made of: Heat moved in waves at the speed of sound.

That's pretty rad for a couple of reasons: Heat isn't supposed to move like a wave — it usually diffuses and bounces off of jiggling molecules in every direction; If heat can travel as a wave, it can move in one direction en masse away from its source, sort of zapping energy all at once from an object. Some day, this heat-transfer behavior in graphite could be used to cool down microelectronics in a snap. That is, if they can get it to work a reasonable temperature (they were working in bone-chilling temperatures of minus 240 degrees Fahrenheit, or minus 151 degrees Celsius).

"If it makes it to room temperature in some materials, then there would be prospects for some applications," study researcher Keith Nelson, an MIT chemist, told Live Science, adding that this is the highest temperature anyone has seen this behavior occur. [The 18 Biggest Unsolved Mysteries in Physics]

Get on the heat train

The researchers described "normal" heat movement using a heated kettle — After turning off the burner, that heat energy hitches a ride on air molecules, which bump into each other and hand off heat in the process. These molecules bounce around in every direction; some of these molecules scatter right back to the kettle. Over time, the kettle water and the surroundings reach equilibrium at the same temperature.

In solids, molecules don't move because the atoms are locked into position. "The thing that can move is sound waves," said Nelson, who spoke with Live Science along with co-author Gang Chen, a mechanical engineer at MIT.

Rather, heat hops onto phonons, or little packets of sound vibration; the phonons can bounce and scatter, carrying heat sort of like air molecules do from the kettle. [What's That Noise? 11 Strange and Mysterious Sounds on Earth]

That's not what happened in this new experiment.

Previous theoretical work by Chen predicted that heat might travel like a wave when moving through graphite or graphene. To test this out, the MIT researchers crossed two laser beams on the surface of their graphite, creating what is called an interference pattern in which there were parallel lines of light and no light. This created the same pattern of heated and unheated regions at the graphite surface. Then, they aimed another laser beam at the setup to see what happened once it hit the graphite.

"Heat flowed much faster because it was moving in a wave-like fashion without scattering," Nelson told Live Science.

How did they get this weird behavior, which the scientists call "second sound," to occur in graphite?

"From a fundamental perspective, this is just not ordinary behavior. Second sound has only been measured in a handful of materials ever, at any temperature. Anything we observe that's far out of the ordinary challenges us to understand and explain it," Nelson said.

Here's what they think is going on: Graphite, or a 3D material, has a layered structure in which the thin carbon layers hardly know the other is there, and so they sort of behave like graphene, which is a 2D material. Because of what Nelson calls this "low dimensionality," the phonons carrying the heat in one layer of the graphite are much less likely to bounce about and scatter off other layers. Also,the phonons that can form in graphite have wavelengths that are mostly too big to reflect backwards after crashing into atoms in the lattice, a phenomenon known as backscatter. These little sound packets do scatter a bit, but travel mostly in one direction, meaning that on average, they could travel a large distance much faster.

Their research was published today (March 14) in the journal Science.

Editor's Note: This article was updated to clarify some of the methods in the experiment and the fact that the heat traveled at about the same speed that sound would travel through graphite, not air, as was previously stated.