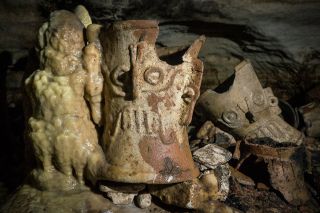 An interior view of the artifacts found in the Balamku caverns beneath Chichén Itzá.
(Image: © Karla Ortega/Proyecto Gran Acuífero Maya)

Shimmying through a maze of dark tunnels below the Mayan ruins of Chichén Itzá on Mexico's Yucatán Peninsula, archaeologists have rediscovered a long-sealed cave brimming with lost treasure.

According to an statement from Mexico's National Institute of Anthropology and History (INAH), the cave is stockpiled with more than 150 artifacts, including incense burners, vases, and decorative plates adorned with the faces of ancient gods and other religious icons. The trove is believed to be just one of seven sacred chambers in a network of tunnels known as Balamku — "Jaguar God" — that sits below Chichén Itzá, a city that accommodated millions of people at its peak during the 13th century. The artifacts have likely been untouched by human hands for more than 1,000 years, according to the INAH.

Though the treasures were probably deliberately sealed off, the ritual cave, rediscovered in 2018 by archaeologists hunting for a sacred well below the city, has had at least one human visitor in the past millennium, National Geographic reported. The cave was initially discovered in 1966 by archaeologist Víctor Segovia Pinto, who wrote a report about the find, but never excavated before directing local farmers to seal the cavern's entrance for reasons that are still unknown. Segovia's records of the discovery went missing, leaving behind a mystery that would take five decades to solve. [30 of the World's Most Valuable Treasures That Are Still Missing]

Last year, archaeologists crawled for hours at a time through a claustrophobic network of pitch-black tunnels below the city to reach the sealed cave's entrance, lead investigator Guillermo de Anda, an archaeologist at the INAH, told National Geographic. Studying the trove of untouched artifacts within the cave will help researchers better understand the culture of Mayan cave rituals, de Anda said.

Studying the cave itself, including the site's geology and microbiology, could also yield critical details about the water and climate cycles that prevailed during the rise and fall of Chichén Itzá, the researchers said.

"Balamku can tell us not only the moment of collapse of Chichén Itzá, it can also probably tell us the moment of its beginning," de Anda told National Geographic. "Now, we have a sealed context, with a great quantity of information, including usable organic matter, that we can use to understand the development of Chichén Itzá.”