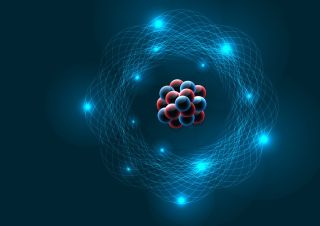 If you got aboard the Magic School Bus and started shrinking — smaller than an ant or an amoeba or a single cell, and then kept shrinking until single atoms were as big as whole worlds, and even their constituent particles towered over you — you'd enter a world bubbling with enormous, conflicting pressures.

At the center of a proton, a pressure greater than that found inside a neutron star would fling you out toward the particle's edge. But at the outer limits of the proton, an equal and opposite force would push you toward the proton's center. Along the way, you'd be buffeted by sideways-moving shear forces that far exceed anything any person will ever experience in their lifetime.

A new paper, published Feb. 22 in the journal Physical Review Letters, offers the most complete description yet of the competing pressures inside a proton, not just in terms of its quarks — the particles that give a proton its mass — but its gluons, the massless particles that bind those quarks together. [The 18 Biggest Unsolved Mysteries in Physics]

Simple descriptions of protons involve just three quarks held together by a bunch of gluons. But those descriptions are incomplete, said study co-author Phiala Shanahan, a physicist at the Massachusetts Institute of Technology (MIT).

"The proton is made up of a bunch of gluons and then actually a bunch of quarks," Shanahan told Live Science. "Not just three. There's three main quarks, and then any number of quark-antiquark pairs that appear and disappear...and it's all the complicated interactions of this bubbling, boiling quantum state that generate the pressure."

Shanahan and co-author William Detmold, who is also a physicist at MIT, found that gluons produce about twice as much pressure as the quarks inside a proton, and that this pressure is distributed across a wider area than previously known. They found that a proton's total pressure peaks at 100 decillion (or 1 with 35 zeros after it) pascals — or about 260 sextillion (or 26 with 22 zeros after it) times the pressure at the center of Earth. [How Long Would It Take to Fall Through the Earth?]

But as huge as those pressures are, there's no way for scientists to directly measure them under most circumstances. To probe the interiors of protons, scientists bombard them with even-tinier electrons at very high energies. In the process, they change the protons. No known experiment can reveal what it's like inside a proton at the low energies they usually experience.

So scientists rely on the theory of Quantum Chromodynamics (QCD) — which describes quarks and the strong force-carrying gluons that bind them together. Scientists know QCD works because high-energy experiments bear out its predictions, Detmold said. But at low energies, they have to trust in math and calculations. [Strange Quarks and Muons, Oh My! Nature's Tiniest Particles Dissected (Infographic)]

Instead, researchers turn to supercomputers that network thousands of processor-cores together to solve complicated equations.

Even with two supercomputers working together, the calculations took about a year, she said.

Shanahan and Detmold broke the proton into its different dimensions (three for space, and one for time) to simplify the problem the supercomputers had to solve.

Instead of a single number, the resulting pressure map would look like a field of arrows, all different sizes and pointing in different directions.

So the answer to the question, "What is the pressure inside a proton?" depends a lot on what part of the proton you're asking about.

It also depends on the radius of the proton. If protons are bags of gluons and quarks, those bags grow and shrink depending on the other particles acting on them. So Shanahan and Detmold's results don't boil down to a single number.

But now our maps of the extremes of all these tiny, boiling worlds inside us are a lot more vivid.